Artists did a fabulous job on PM Hasina: Information Minister 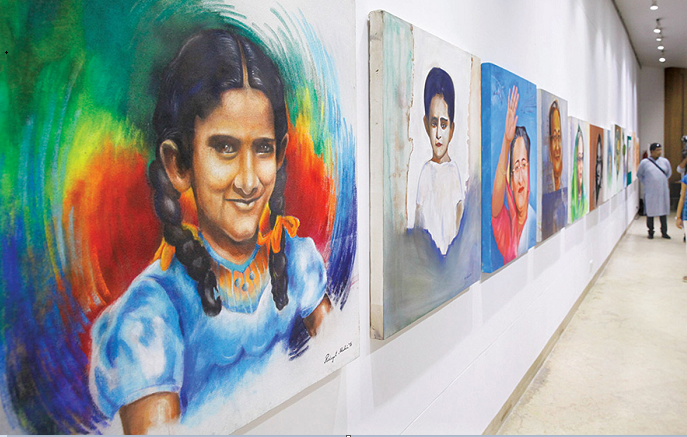 Information Minister Dr Hasan Mahmud on Tuesday said artists have done a fabulous job by pouring their hearts and souls in their artworks on Prime Minister Sheikh Hasina.

The minister made the remarks while virtually inaugurating a two-month long group art exhibition titled “Sheikh Hasina: On the Right Side of History” featuring 21 artists at Cosmos Centre in the city.

Emphasising the importance of artworks to face the anti-liberation forces, Dr Hasan Mahmud said heart-wrenching love and dedication are needed for creative works like art and writing.

“What these artists did, they did it with their heart-wrenching love and affection they have for her (Hasina) in their hearts. So, I express my gratitude to them,” he said.

Speaking at the programme, Enayetullah Khan, Chairman of Gallery Cosmos, said the exhibition has been arranged as part of the birth centenary celebrations of Father of the Nation Bangabandhu Sheikh Mujibur Rahman.

He said Sheikh Hasina has been working with utmost dedication and sincerity for building prosperous Bangladesh risking her life and raising above personal interests. “This sacrifice and commitment inspire us all. Today's exhibition is just a small reflection of our such commitment.”

“We also find the golden sign of future Bangladesh in Sheikh Hasina as she has shouldered the responsibility for completing the unfinished tasks of Bangabandhu who was killed with the bullets of assassins,” Khan said.

He said Sheikh Hasina is the embodiment of a happy and prosperous Bangladesh, a beacon of Bengali renaissance and a dreamer of future Bangladesh. “She has got a permanent place in the hearts of Bengalees for her relentless concern for their welfare.”

Khan said the nation is moving ahead under the leadership of Bangabandhu's daughter Sheikh Hasina in the beginning of the 21st century. “Our today’s art camp is dedicated to her.”

He said Cosmos Books will publish a book based on the artworks of the camp within a month or two.

Tehmina Enayet, Director of Gallery Cosmos, said Bangabandhu’s elder daughter has been working untiredly for the development of the country and the welfare of its people.

She said the exhibition has been arranged with 21 artworks by 21 leading and promising artists on the occasion of Bangabandhu’s birth centenary.

The exhibition will remain open till February 12, 2021 at Cosmos Centre and can only receive 20 visitors at a time maintaining health safety protocols.

Visitors have been advised to wear face masks all the time while visiting the exhibition and maintain appropriate distance from each other.

As part of the year-long programme to celebrate the birth centenary of Father of the Nation Bangabandhu Sheikh Mujibur Rahman, Gallery Cosmos in collaboration with the Cosmos Atelier71 recently hosted the art camp supported by the Cosmos Foundation on Prime Minister Sheikh Hasina and the artworks produced there.