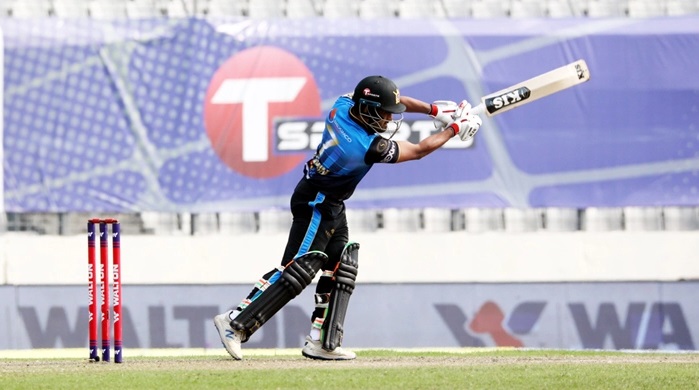 Beximco Dhaka kept the hope of playing the final of Bangabandhu T20 Cup alive after they recorded a nine-run victory over Fortune Barishal in the Eliminator game at Sher-e-Bangla National Cricket Stadium on Monday.

Dhaka will now play the second Qualifier tomorrow (Tuesday) against the loser of the first Qualifier, which will be held between between Gemcon Khulna and Gazi Group Chattogram later today.

Standing on an equation of being eliminated from the final race should they loss the Eliminator, Dhaka brought up a spirited game despite fumbling several times in fielding.

Firstly they recovered from a shaky start to rack up 150-8, a total that looked not enough in the pitch conducive to batting but their bowlers kept the side in the hunt despite some wretched fielding and catching from the fielders as they eventually restricted Barishal to 141-9.

Such was shoddy fielding that Dhaka missed two clear and easy run out chances, which was enough to anger captain Mushfiqur Rahim. He vented his anger to the fielders and even on the bowlers on several occasions when they were bowling length deliveries to give some easy boundaries.

Yasir Ali Rabbi struck a 43 ball-54 with three fours and two sixes to provide Dhaka the impetus, which was needed after a poor start.

Captain Mushfiqur Rahim also played a useful knock of 43 off 30, hitting four fours and one six.

Yasir and Mushfiqur shared 50-run for the fourth wicket stand after Dhaka was left to a tittering 22-3.

After being sent to bat first, Dhaka received a huge setback when the centurion of previous game, Naim Sheikh was dismissed for 5. In the immediate next over, Al-Amin Hossain, the No.3 batsman of Dhaka was undone by a length delivery of Taskin to be out for naught.

The situation got worsened when Suhrawardi Shuvo outfoxed Sabbir Rahman with a flighted delivery to get rid of him for 8.

Yasir and Mushfiqur however patiently dealt the rampant Barishal bowlers and revived the innings.

It needed an excellent return catch from Kamrul Islam Rabbi to remove Mushfiqur and broke the partnership.

Akbar Ali kept the up the rhythm, with a 9 ball-21 that included three fours and one six.

Due to the trio, Dhaka who scored just 24 runs, losing three wickets, in the first six overs, piled up runs at excellent rate in the middle overs as they made 79 runs between the overs of 7 to 15.

It looked they would end up score like 180 or above, however, a poor show in the last powerplay, restricted them a total that looked like an easy target for Barishal. The last powerplay fetched them just 47 runs with the loss for four wickets.

Barishal made a slow start in pursuit of a moderate target with captain Tamim Iqbal who made him available in the game after being tested negative for Covid-19, eating up deliveries after deliveries.

At the other end, Saif Hasan though hit three boundaries, he was first to go after pacer Shafiqul Islam rattled his stump with a delivery that swung sharply.

Parvez Hossain Emon, the fastest centurion of Bangladesh in T20 cricket, also had a bad day in the office as he was dismissed for 2 for which he took 11 deliveries.

Barishal’s agony was increased further when Tamim Iqbal was removed after making 22 off 28.

As the target was smaller, it needed just one good partnership to overhaul and Afif Hossain and Towhid appeared to provide it.

However as the partnership looked dangerous, Al-Amin’s occasional spin got the better of Ridoy for 12. Afif nevertheless looked determined.

Unfazed by Afif’s unwavering resolve, Dhaka bowlers kept taking wickets and stifled the innings to such extent that there was no way for Barishal to look back.

Afif had to take risk to match with the asking run rate, which eventually resulted in his dismissal. He made 55 off 35 with three fours and four sixes.

With the dismissal of Afif, Barishal’s hope to beat Dhaka was faded away.

Mahidul Ankan and Mehidy Hasan though played some big shots, those were not enough to seal the deal.