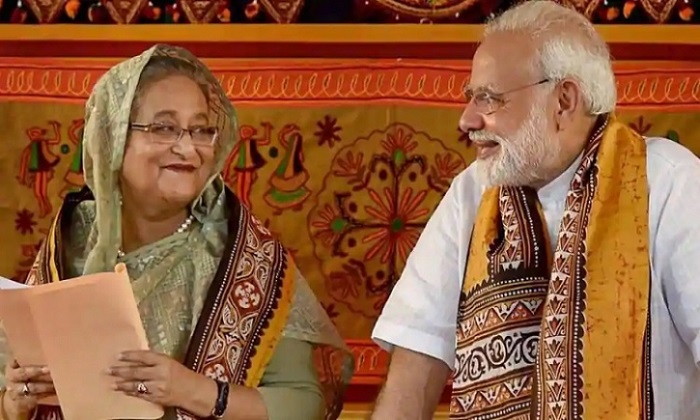 Prime Minister Sheikh Hasina and her Indian counterpart Narendra Modi will hold "comprehensive discussions" on the entire spectrum of the bilateral relationship during their virtual Summit on Thursday (Dec 17).

They will discuss ways to further strengthen cooperation in the post-Covid-19 era, said the Indian Ministry of External Affairs (MEA) on Monday, announcing the virtual Summit officially.

India and Bangladesh have continued to maintain regular exchanges at the highest level, MEA said.

Both the leaders have remained in regular touch during the Covid-19 pandemic, MEA said.

On Sunday, Foreign Minister Dr AK Abdul Momen said Bangladesh will raise all the big issues, including water and border ones during the virtual Summit.

“We’ll raise our major issues, which we usually raise,” he told reporters at his office adding that a number of “quick-impact” projects will be inaugurated, too.

Chilahati-Haldibari rail link, a pre-1965 connectivity line, would be inaugurated along with some other projects during the virtual Summit.

The Foreign Minister, however, said the month of Victory will come up prominently in the meeting because it is also a victory for India as they helped Bangladesh achieve the victory. “We must acknowledge the contributions of the then Indian Prime Minister.”

Dr Momen said the relations between Bangladesh and India are historic and of blood-relations, and India is a time-tested friend of Bangladesh. “So, India has reasons to be proud of our victory.”

He recalled the then governments of India and the United Kingdom for bringing Father of the Nation Bangabandhu Sheikh Mujibur Rahman back to home alive. “We must acknowledge it.”

The Foreign Minister said Bangladesh and India are witnessing a golden chapter in their relations. “Two countries have set an example by resolving issues like LBA and maritime boundaries through dialogue and discussion.”

He said they believe that the two countries can resolve all the issues through discussion. “Prime Minister Sheikh Hasina has shown leadership maturity in resolving problems.”

Responding to a question, Dr Momen said a Swadhinata Sarak will be opened marking the 50 years of Bangladesh’s independence on March 26 next year.

He said the road remains functional on the Indian side while it will be connected through Mujibnagar, Meherpur district. “It’ll help boost people-to-people contact between the two countries.”

Bangladesh has invited Indian Prime Minister Narendra Modi to visit Bangladesh on March 26 in person to jointly celebrate the Independence Day of Bangladesh. The Indian side accepted the invitation in principle.

Bangladesh and India will chart out plans to take the "rock-solid and historic" Dhaka-Delhi relations to the next level expanding areas of cooperation between the two countries with a number of engagements in the coming months, officials said.

In March this year, the two Prime Ministers joined a virtual meeting of Saarc countries on cooperation to deal with the Covid-19 situation in the region.