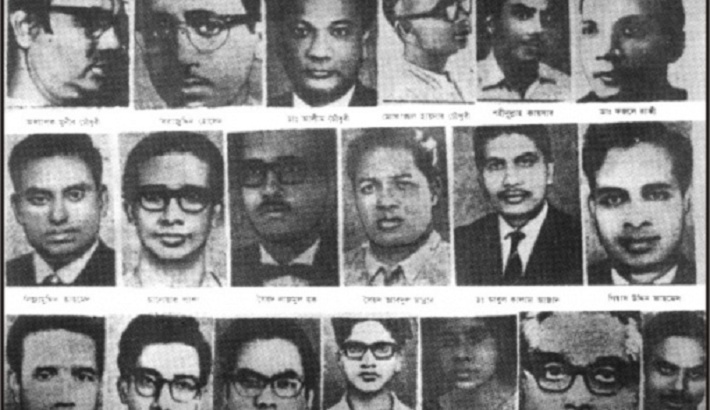 The nation observes Martyred Intellectuals Day today paying homage to the intellectuals who were killed by the Pakistani occupation forces and their collaborators at the fag end of the country’s Liberation War in 1971.

Sensing an imminent defeat in the war, the Pakistani forces and their local aides designed to annihilate the intelligentsia to cripple the emerging nation.

On this day in 1971, Pakistani army with the help of their accomplices picked up educationists, litterateurs, journalists, physicians and cultural activists from their houses, took them blindfolded to the killing grounds and staged one of the history’s worst pogroms.

Elaborate programmes have been taken to mark the day. The programmes include paying homage to Father of the Nation Bangabandhu Sheikh Mujibur Rahman, hoisting the national and black flags at half-mast and placing wreaths at Martyred Intellectuals Memorial at Mirpur and Rayerbazar Killing Ground at Mohammadpur in the capital.

The programmes will be held following the health and hygiene rules due to the ongoing coronavirus pandemic.

On the eve of the day, President Abdul Hamid and Prime Minister Sheikh Hasina paid deep respects to the best sons of the soil on the occasion of Martyred Intellectuals Day.

In separate messages, the President and the Prime Minister urged the people to come forward being imbued with the ideology of the martyred intellectuals and the spirit of the Liberation War to build a non-communal, happy and prosperous ‘Sonar Bangla’.

President Abdul Hamid in his message said the intellectuals, as the conscience of the nation, had played a very significant role with their sharp writings and intellect-based spirit to create public opinion in favour of the Liberation War, provide suggestions to the war-time Mujibnagar government in advancing the war towards its successful end.

It is unfortunate that the Pakistani forces and their local collaborators brutally killed the country’s eminent intellectuals, including academicians, physicians, litterateurs, journalists and artists just on the eve of the victory, causing an irreparable loss to the nation, he added.

The President called upon all to be imbued with the ideology of the martyred intellectuals and build a non-communal society based on the spirit of the Liberation War.

In her message, Prime Minister Sheikh Hasina said at the fag end of the Liberation War, the Pakistani occupation forces, anti-liberation forces and their local collaborators hatched conspiracies to turn the nation into a brain-empty state.

She said when the country was close to the final victory under the leadership of the greatest Bangalee of all times, Father of the Nation Bangabandhu Sheikh Mujibur Rahman, the intellectuals were killed by the occupation forces and their local cohorts like Al-Badars, Al-Shams and Razakars.

The prime minister called upon the people to get united against the conspiracies of the killers of 1971 and war criminals and Jamaat-clique.

The family members of the martyred intellectuals and freedom fighters will place wreaths at Martyred Intellectuals Memorial and Rayerbazar Killing Ground at Mohammadpur.

Later, people from all walks of life will place wreaths at the Martyred Intellectuals Memorial. Bangladesh Television and private television channels will broadcast special programmes highlighting the significance of the day.

Discussions will be held at the district and upazila levels across the country on the occasion. To mark the day, the national flag will fly at half-mast atop all government offices and educational institutions.

Awami League will hoist black flags and keep the national and party flags at half-mast at Bangabandhu Bhaban and all party offices across the country at the dawn.

The party placed wreaths at Mirpur Intellectual Graveyard, Bangabandhu Bhaban and Rayer Bzar Graveyard in the morning.  The Dhaka University authorities will observe the day through a series of programmes.