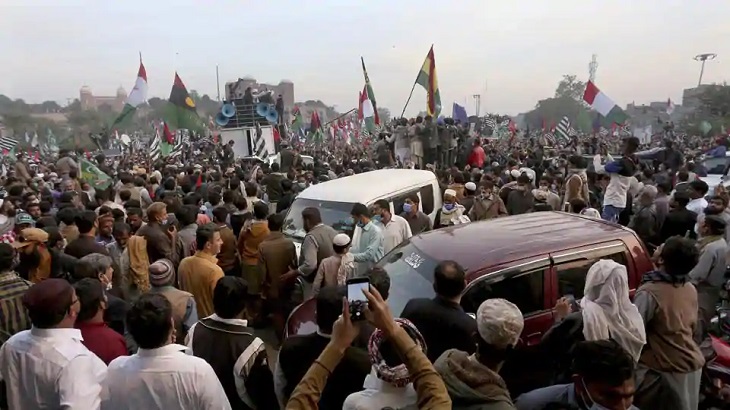 Amid a series of opposition rallies in Pakistan, the Islamabad administration on Friday extended a ban on all kinds of gatherings of five or more people, processions, and demonstrations at any public place in Islamabad, including the Red Zone, where important government buildings are located, for a period of two months.

According to a notification, the ban over the gatherings was extended after knowing that certain segments of society are planning to organise unlawful assemblies, including majlis and processions which can disrupt public peace and tranquillity and keeping in view the current law and order and security environment.

The sale, purchase and use of firecrackers and fireworks, distribution of handbills, pamphlets, carrying out wall calking, writing slogans and affixing posters on the walls were also prohibited for a period of two months.

According to another notification, the ban on carrying, displaying and exhibiting firearms was also extended.

A two-month ban was also placed on the publication of housing schemes or sale of plots. The notification regarding the ban claimed that speculative transactions also emerge out of the situation which jeopardizes the interest of the people and deprive them of their hard-earned money, thus creating panic and anxiety in the society.

Likewise, the ban also extended over the use of cassette players sound, system, CD/DVD and other mediums for making objectionable/sectarian-related speeches, Dawn reported.

This comes as Pakistan opposition’s 11-party alliance - Pakistan Democratic Movement (PDM) is set to hold its sixth power show in Lahore on Sunday, despite efforts by Prime Minister Imran Khan’s to block the rally proceedings.

The Pakistan government also flooded the Minar-e-Pakistan lawns in a “failed effort” to stop PDM from holding their rally on December 13.

The PDM has held five similar rallies in Peshawar, Gujranwala, Karachi, Quetta and Multan since October 16.