Illegal vehicles get off scot-free 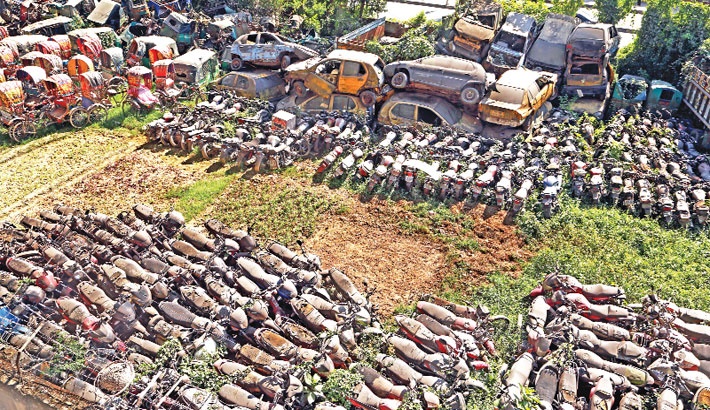 A large number of vehicles running without valid fitness certificates, licences and route permits are getting away scot-free because of a serious shortage of traffic dumping grounds in the capital.

Traffic police allow such vehicles to go free as there is no permanent dumping station for the seized vehicles.

They are also flexible to traffic lawbreakers, which may throw the entire traffic management into disarray.

Sources at Dhaka Metropolitan Police (DMP) said there are nine temporary traffic dumping stations in the DMP area and most of their spaces are filled with the seized vehicles.

A deputy commissioner of police (Traffic) wishing anonymity said they sometimes cannot seize the unauthorized and illegal vehicles for a shortage of spaces at the dumping stations.

“Despite a ban by the Dhaka South City Corporation (DSCC), we are not seizing auto-rickshaws because there is no enough space to keep any more vehicles seized.

They are also being forced to keep the seized vehicles on many roads and alleys in nearby areas of dumping stations and police stations, he also said.

Talking to the Daily Sun, DMP Additional Commissioner (Traffic) Abdur Razzak said, “The traffic division of the DMP has no permanent dumping stations for keeping any seized vehicles. We’re using vacant spaces of roads and highways, the city corporations and others for dumping the vehicles.”

Meanwhile, the DNCC has asked police to remove the seized vehicles dumped on a road in Agargaon area as they occupied a portion of the main road.

Talking to the Daily Sun, DNCC Mayor Atiqul Islam said, “I raised the issue at the meeting of the bus-route rationalisation many times and emphasised on finding out spaces for dumping. In the meeting, the chairman of Rajuk promised to allot a piece of land for a dumping ground in Purbachal New Town area.”

“But we have no scope to select a piece of land for a traffic dumping station because we are facing a severe land crisis to set up our own office,” he also said.

He also said that for setting up a permanent dumping station at the project, it is needed to bring a change in the layout plan which is impossible without the order from the government high-ups.

Asked about the traffic dumping at Purbachal, DMP Additional Commissioner (Traffic) Abdur Razzak said it is not feasible to set up dumping stations in remote Purbachal area.

DSCC Spokesperson and Public Relations Officer Abu Nasher said they have no plan to set up or allocate any land for dumping stations.

“We have no plan for setting any dumping station under the DSCC jurisdiction for the seized vehicles as of now,” he said.

A DMP official record said they have nine dumping stations at Shyampur Police Station just under the Postogola Bridge, under the Kanchpur Bridge in Narayanganj, behind Shahbagh Police Station, a portion of the road from Begum Rokeya Sarani to the Bangladesh Bureau of Statistics office at Agargaon, beside Sher-e-Banglanagar Police Station, in front of Bangladesh Public Service Commission office, Kawla Service road under Kamarpara and Darus Salam area.

During a recent visit to Kanchpur Bridge, Shaympur Bridge, Postogola Bridge and Agargaon dumping stations, it was found that the stations were full with vehicles. However, the dumping grounds are very small.

Besides this, almost all DMP police stations, including Vatara, Bangshal and Mugda ones, have turned into dumping stations as a large number of the seized vehicles have been kept there.