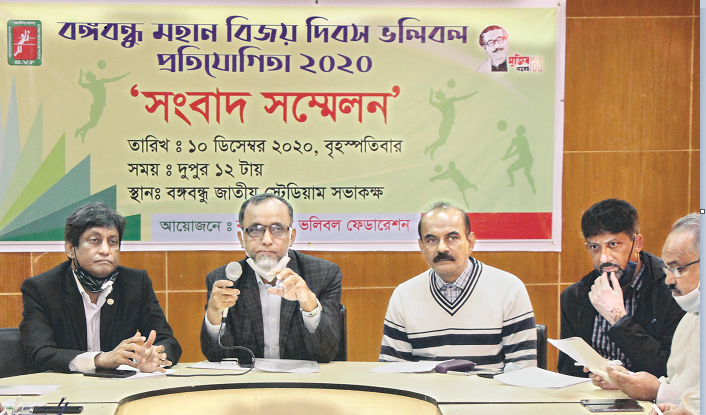 Bangladesh Volleyball Federation (BVF) will return to the field with Bangabandhu Victory Day Volleyball Competition 2020 after a long COVID-19 enforced break. The competition, which is named after Father of the Nation Bangabandhu Sheikh Mujibur Rahman, is scheduled to be held from December 12 to December 17 at Shaheed Nur Hossain National Volleyball Stadium in the capital.

Nine teams namely Army, Police, Navy, Air Force, Ansar, Jail, Fire Service, Titas and Power Development Board (PDB), split into three groups, will take part in the men's event. Besides, three teams, Jamalpur, Police and Ansar, for the first time are taking part in the women’s event of the meet.

Secretary of the Ministry of Commerce Dr Md Jafar Uddin will inaugurate the meet as the chief guest on Saturday. BVF General Secretary Ashikur Rahman Miku disclosed the details in a presser at the conference room of Bangabandhu National Stadium (BNS) on Thursday. Tournament committee secretary and BVF joint secretary Adv Fazle Rabbi Babul, treasurer Asim Saha and others were also present there.

“We will return to the field with Bangbandhu Victory Day Volleyball Competition after a long COVID-19 break. All the participating teams have been informed to strictly follow the health measures and to come with their respective COVID-19 test reports. Besides, we have appointed a doctor to examine those reports before the matches.  We've also decided to allow spectators on a limited scale during the competition,” said Miku.

Miku further said that they had also decided to arrange the National Championship from December 25. “We have also decided to start the National Championship after this competition from Dec 25. NSC has started to renovate the volleyball stadium, so we have to halt our activities for a while and leave the field to them,” the BVF General Secretary added.