Negative statement made by Khaleda Zia boomerangs on her 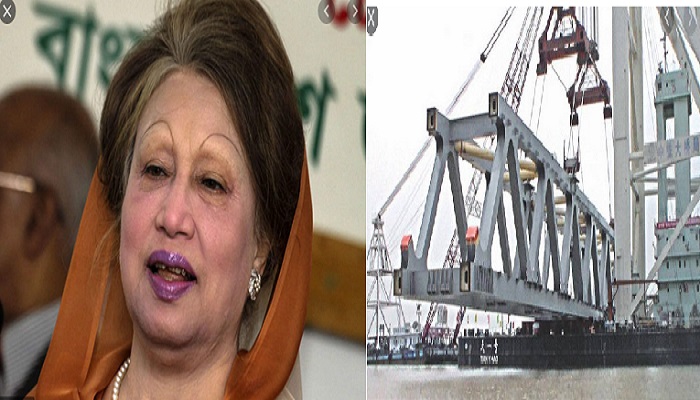 Negative statements made by BNP chairperson Khaleda Zia on the Padma Bridge have boomeranged on her.

Installation of the 41st and last span of Padma Bridge on Thursday has ridiculed former premier Khaleda Zia who is convicted in several graft cases and now at Gulshan residence being released on the government’s executive order.

Negative campaign against the Padma Bridge by her has come to the fore of discussion following installation of the last span.

The construction work of the bridge is going in full swing although development activities in even modern and developed countries have come to standstill due to corona pandemic.

Installation of the last span is major stride towards the government’s plan to inaugurate the bridge to be used for vehicular movement next year (2021).

A question has been raised as to how a head of political party like BNP can spread negative campaign against the country’s dream project which is set strengthen communications and boost trade and commerce.

Addressing a function, on January 2, 2018, Khaleda Zia said Padma Bridge will be risky to use it for being constructed with patchworks. She urged people not to use it.

She made the statements at a discussion at the Institution of Engineers, Bangladesh (IEB) arranged by Jatiyatabadi Chhatra Dal (JCD).

Following example of Khaleda, other leaders of the party also made critical comments on the Padma Bridge.

“Main objective of them (ruling Awami League) was to plunder money, not construct the bridge,” said BNP standing committee member and former law minister Moudud Ahmed at a programme.

Many other leaders of BNP made similar comments which were made to confuse people and disregard the government’s good initiative, said experts.