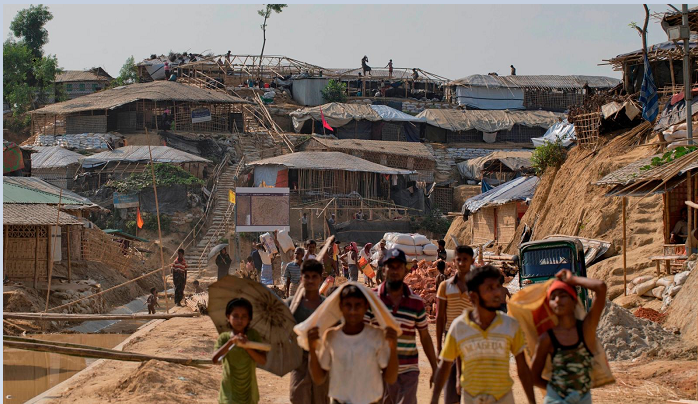 Rohingyas in Bangladesh who survived genocide in Myanmar are experiencing a "severe" mental health crisis, according to data in a new report published on Thursday by Fortify Rights.

“The scale of the problem is massive but not insurmountable. Governments should prioritize the mental health of the Rohingya community and ensure survivors of the genocide in Myanmar can rebuild their lives with dignity.”

United Nations agencies estimate that 12 months after an emergency, approximately 15 to 20 percent of adults will experience some type of moderate or mild mental health disorder.

The data further shows how these symptoms adversely impact the daily lives and functioning of Rohingya genocide survivors.

The 99-page report, “The Torture in My Mind”: The Right to Mental Health for Rohingya Survivors of Genocide in Myanmar is based on participatory action research conducted between March 2018 to November 2020 by a team of ten ethnic-Rohingya researchers trained and supported by Fortify Rights.

The report provides new evidence of the severe mental health toll that genocide, human rights violations, and violence has on survivors.

The quantitative methods used in the report ensure the results are representative of the entire Rohingya refugee population in Bangladesh.

The most highly reported symptoms experienced by Rohingya refugees in Bangladesh related to reliving traumatic events.

For example, 97.6 percent of Rohingya experienced some level of “recurrent thoughts or memories of the most hurtful or terrifying event,” “feeling as though the event is happening again” (96.6 percent), and “recurrent nightmares” (82.2 percent).

The trauma symptoms experienced by a majority of Rohingya are indicative of Post-Traumatic Stress Disorder, a serious mental-health condition that can interfere with leading a constructive life.

“When I try to sleep, I imagine what the military and Buddhists have done to me,” a 40-year-old Rohingya woman told the research team. “I feel like they are coming, chasing, and shooting me. I think of how they hacked and killed people and threw children on the fires. When I am in bed, the imagination of the torture appears in my mind.”

“[The Myanmar military] hacked two of my cousins,” a Rohingya man from Maungdaw Township, Rakhine State told the research team. “The other five are missing, and we’ve received no information yet.”

Of those indicating the murder of an immediate family member, 99.3 percent reported that security forces in Myanmar perpetrated the killing.

The research also found 34.3 percent of Rohingya refugee men experienced sexual abuse, sexual humiliation, or sexual exploitation in Myanmar, compared with 31.1 percent of women—figures that may be affected by underreporting.

In addition, 67.3 percent of Rohingya survey participants indicated that they had witnessed sexual violence or abuse in Myanmar.

The report findings demonstrate that restrictions on education, freedom of movement, healthcare, religious expression, and other violations are pervasive in Myanmar and contribute to protracted symptoms of trauma, depression, and anxiety.

The vast majority of Rohingya also experienced symptoms of anxiety and depression, including “worry[ing] too much about things” (92.5 percent), “feeling sad” (91.3 percent), “loss of interest in things [they] previously enjoyed doing” (89.5 percent), and “feeling tense or [agitated]” (88.7 percent).

Most of Rohingya refugees in Bangladesh (68.7 percent) reported feeling “humiliated or subhuman,” which also significantly contributes to mental-health distress.

“They treated us worse than animals,” said a 44-year-old Rohingya research participant referring to actions by Myanmar authorities.

“They considered and counted us like animals. They put people inside houses, locked the door, and burned the houses and the people as well. Would anyone do that to an animal?”

According to the report, 91.3 percent of Rohingya refugees in Bangladesh face some level of difficulty carrying out common daily activities, such as maintaining basic hygiene, engaging in social or religious activities, or performing other daily tasks. Of those who experience functioning difficulties, 62.3 percent attributed these difficulties to ailing mental health.

“I feel like it is very difficult to do anything,” said a 27-year-old research participant. “Although it has been seven months since I came here [to Bangladesh], I cannot forget the pain and torture.”

The report includes a chapter profiling the research team, providing further insight into their contributions and the impact of the research process itself.

Members of the research team also contributed to a participatory photo essay published in the report by award-winning Bangladeshi photographer Saiful Huq Omi, whereby each team member decided how they would be photographed.

“Rohingya are not merely victims,” said Matthew Smith. “The idea that persecuted groups can’t objectively represent themselves is false and pernicious. The Rohingya team did excellent work documenting information that will affect humanitarian priorities and efforts to ensure justice.”

The Rohingya are a predominantly Muslim ethnic minority indigenous to Myanmar’s Rakhine State.

There are an estimated 2.5 million Rohingya worldwide, including approximately 600,000 in Rakhine State and approximately one million living as refugees in Bangladesh.

Fortify Rights, a U.N. Fact-Finding Mission, Rohingya-led organizations, and others determined those attacks amounted to genocide and crimes against humanity.

Humanitarian agencies operational in the refugee camps in Bangladesh face needless government obstacles in doing their work, and mental health interventions have been limited in scope since the 2017 genocide, said Fortify Rights.

Certain foreign governments have considered whether or not to designate the situation in Myanmar a genocide.

All Rohingya surveyed for this report (100 percent) believe that the ultimate intent of the Myanmar military and government was to destroy the Rohingya people.

“The human right to mental health for Rohingya is inextricably linked to ending the violations and ensuring justice and accountability,” said Matthew Smith.

“Many direct-service providers do excellent work to address the mental health needs of refugees and migrants, and Bangladesh and donor governments should ensure those efforts are brought to scale for Rohingya. Bangladesh should do everything in its power to remove any conditions that cause psychological harm to the refugee population.”