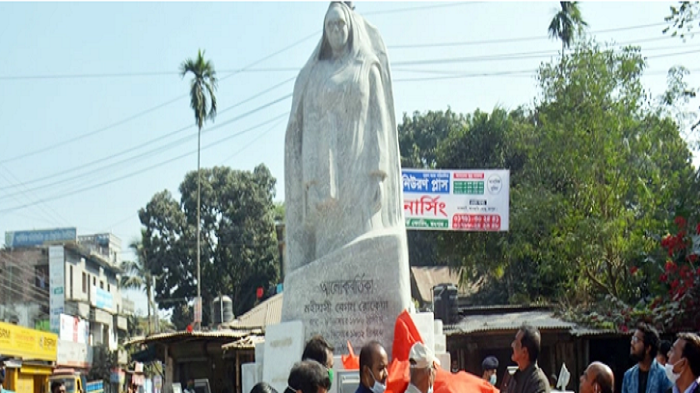 The newly built sculpture ‘Alokbortika’ (Light) of Begum Rokeya was unveiled here today marking the 140th birth and 88th death anniversary of the pioneer for women renaissance in the subcontinent.

Earlier on November 7 in 2016, the first Mayor of Rangpur Alhaj Sarfuddin Ahmed Jhantu formally inaugurated construction of the sculpture at a ceremony held there four years ago as the chief guest.

Talking to local journalists, sculptor Aneek Reza, who constructed the sculpture, said he was asked by the Rangpur City Corporation authority to unveil the sculpture.

Accordingly, he prepared to ceremonially expose the sculpture at a limited scale function arranged abiding by the health directives of the government in the wake of the coronavirus pandemic.

The newly inaugurated sculpture of Rokeya, who came out of the rock with the power of education to change the society through women empowerment, contains some books and sayings written by her including the year of her birth and death.