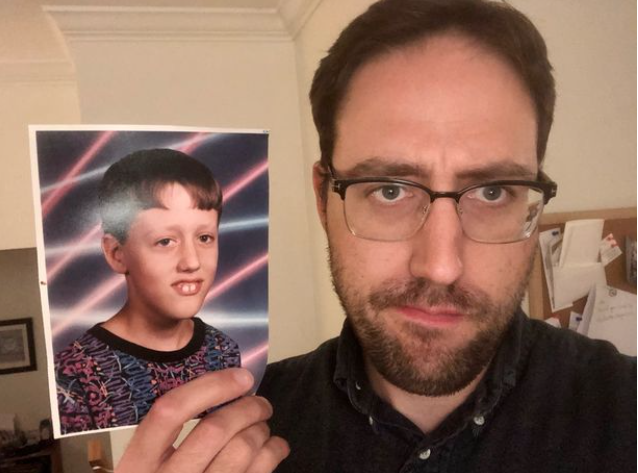 A man was left shocked when he discovered that a photo of him as an eight-year-old had been turned into a meme.
Adrian Smith was scrolling through Instagram when he stumbled across a familiar-looking school picture.

It turns out that the image of Adrian in grade three - which is equivalent to year four in the UK - had been turned into a meme, where he's been known as "Grayson" on the 'teenagestepdad' Instagram account, since at least 2017.

"I first stumbled into Grayson on IG. Scrolling through stories, I see my picture pop up.

"It’s a truly bizarre experience to bump into a disconnected version of yourself out there in the wild. Even weirder when it leads down a meme rabbit hole," he said.

Before Adrian, who lives in North Carolina, had shared the image to a Tumblr blog called "We Have Lasers!!!!!!!!" in 2008, "the only place this picture lived was on a wall by my grandma’s backdoor" he revealed on Twitter.

Adrian said he remembered how proud he felt after the picture was taken as he'd successfully managed to find a top that matched the background, which he'd paid an additional $2 (£1.50) for.

"My grin in the picture is one of smug satisfaction", he told Slate.

Speaking of how it felt after making the discovery, the research biologist said: "I could get mad about it and tell him to take it down and 'give me all your profits' — and just be upset about it," he said. "Or the thing I ended up doing which is just owning it."

Adrian shared his surprise on Twitter, where he wrote: "Here’s a very 2020 thing I just learned about myself: this picture of the 8-year-old, 3rd-grade version of me has been a meme FOR YEARS!

One meme sees Grayson transformed into a Chia Pet, while another says "like this image of Grayson to revoke his computer privileges" - there's even merchandise for sale with his face on.

He has since been in touch with its original creator who offered to kill the character off, but Adrian said he was happy for him to carry on using it.