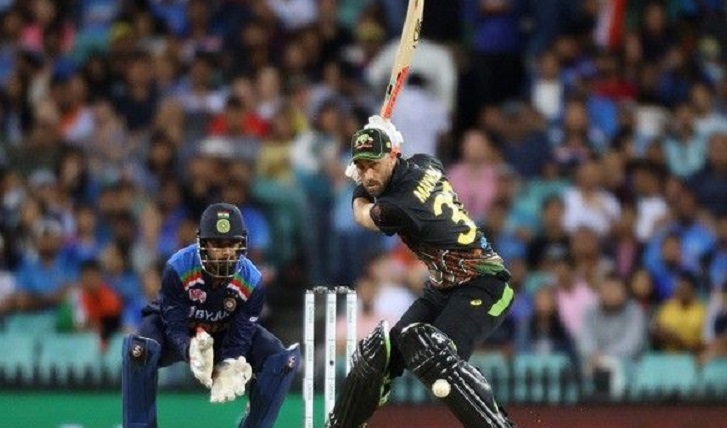 Matthew Wade hit his highest T20 score and an eventful Glenn Maxwell half-century lifted Australia to 186 for five in the final match of the series against India in Sydney on Tuesday.

A raucous crowd of over 28,000 - with attendance limits lifted in new Covid-19 protocols by the NSW government - were entertained by some madcap batting from Maxwell to post a competitive total.

Maxwell had a night out. He survived two reviews, was caught off a no-ball, had a six prevented by athletic Sanju Samson fielding over the rope and finished with three sixes before he was out for 54 off 36 balls.

Wade put on 90 with Maxwell for the third wicket before he was leg before wicket to Shardul Thakur for 80 - his highest T20 score - off 53 balls with seven fours and two sixes.

Maxwell put on a typical 'Big Show' and chanced his luck as he unfurled his full repertoire of quirky shot making.

Maxwell top-edged Yuzvendra Chahal, was caught by Rahul on 19 and was on his way from the wicket before he was recalled for a no-ball.

Samson then athletically saved four runs when he leapt after a massive Maxwell hit off Thakur.

Samson took the catch over the ropes and in the same motion hurled the ball back into the field of play as the batsmen crossed for only two.

Maxwell changed bats and next ball was dropped on 38 at deep backward point by Deepak Chahar off Thakur and celebrated next ball with a monster six over square leg.

Maxwell was dropped again on 53 by Chahal off Thakur before he was bowled by a Thangarasu Natarajan full toss for 54.

Skipper Aaron Finch, back in the side from injury, went the first ball he faced off slow bowler Washington Sundar, bunting it straight to Hardik Pandya at mid-off.

Steve Smith had a life on 18 with KL Rahul's mis-stumping but was bowled three balls later on 22 when he was deceived by a slower Sundar delivery going for a big hit only to miss and see his off-bail dislodged.

Wade had a big moment on 50 when Kohli, fielding deep, delayed calling for a review for leg before wicket off Natarajan but he was ruled late on the call and the review was disallowed. Replays showed Wade was out.

Unchanged India are chasing a 3-0 series sweep in Australia for the second time in five years after losing the preceding one-day international series 2-1.