‘It’s not religious but political aimed at destabilising country’ 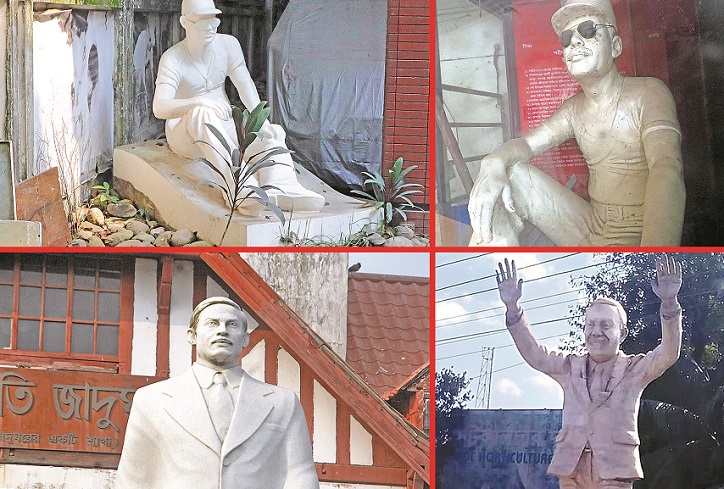 Sculptures of BNP founder and former president Ziaur Rahman have been set up in different parts of the country. The photos were taken on Monday. Clockwise, BNP Chairperson’s Gulshan Office, BNP’s Nayapaltan Office, in Khagrachhari district and Zia Memorial Museum in Chattogram (former Circuit House).

Although Hefajat-e-Islam Bangladesh has given a fatwa (edict) against all types of statues and is opposing the construction of Bangabandhu’s sculptures, it has not raised any voice against murals and statues of Ziaur Rahman and others, raising doubts about its actual motive.

Political analysts say their motive behind the opposition to the installation of Bangabandhu’s sculptures is very much political, rather than religious.

The attack on the Bangabandhu’s sculpture in this month of victory manifests their ant-liberation sentiments, the experts say, referring to the vandalism of an under-construction sculpture of the greatest leader in Kushtia.

The installation of sculptures of Father of the Nation Bangabandhu Sheikh Mujibur Rahman has stirred up unwanted debates as Hefajat is opposing the move and threatened to resist it.

Some pro-Hefajat leaders at a press conference on December 3 last gave a fatwa, saying the construction of idols and sculptures of anything is forbidden as per the Quran and Hadith.

Announcing the fatwa, Mufti Enamul Huque Kashemi said, "Making both statues and idols of a human being or any other animal is forbidden in Islam. It’s totally forbidden and a punishable sin even if anyone builds it with the intention of worship."

If a ruler of a Muslim country does anything violating the religious rules, it is not the duty of Muslim citizens to abide by it,” he said.

At a programme in Chattogram on November 27, Hefajat Ameer Junaid Babunagari said, "All statues will be toppled no matter who they represent. We’ll tear them down.”

At a function at the BMA Bhaban in the capital on November 13 Mamunul threatened to go on a seize programme at the Shapla Chattar while Syed Faizul Karim at a separate programme at Dholaikhal called for jihad to stop the construction of Bangabandhu’s sculptures.

Faizul even went further and threatened to throw the sculpture into the Buriganga River if it is constructed.

There are sculptures of prominent personalities and political leaders, including BNP founder Ziaur Rahman, across the country.

According to information collected from various sources, Bangladesh has a long history of sculptures and statues being made and preserved all across the country, including the capital.

The construction of Bangabandhu’s sculptures has seen a rise in recent times marking his birth centenary.

However, the sculptures of Ziaur Rahman were established much earlier and those exist at the BNP central office at Nayapaltan and party chairperson’s Gulshan office in the capital.

The statues of the BNP founder are also there at different other places, including Zia Memorial Museum in Chattogram.

The sculpture was constructed in front of the Zia Memorial Museum on September 7, 1993 when anyone hardly thought of the sculpture of Bangabandhu in the country.

Wadud Bhuiyan, a BNP MP during the 2001-2005 tenure, installed another statue of Zia at the Muslimpara intersection in Khagrachhari.

According to the information, one of the country’s oldest busts -- the one of King Edward VII of England -- was made in Bogura between 1901 and 1905.

Two statues of Rabindranath Tagore were erected in Naogaon to immortalise his memory. There is also another one at Shilaidaha in Kuthibari of Kushtia. There is another in Shahjadpur.

However, Hefajat leaders are not talking against those. They are only opposing the construction of Bangabandhu’s sculptures, which raised doubts about their actual motive.

Asked why Hefajat was not vocal against sculptures of Zia and others, Mamunul Haque claimed that alem-ulema always registered their protests against construction of any type of statue. “This time the state itself is setting up the statues or sculptures (of Bangabandhu) in big arrangements. We protested it.”

He, however, admitted that many statues or sculptures were set up in restricted areas or indoors whereby they can do nothing. “That’s why, we can’t lodge protest all the time,” he said.

The Hefajat leader said their organisation has long been protesting against the installation of statues and sculptures whenever the issue comes to light.

Political analysts find their motive as suspicious, saying the Islamist party actually wants to destabilise the country in the name of opposition to the installation of Bangabandhu’s sculptures.

“I think there’s a political motive behind the protest by Hefajat-e-Islam against sculptures of Bangabandhu. They want to fish in troubled waters through creating chaos in the country,” Prof Dr Gias Uddin Mollah, president of Bangladesh Political Science Association, told the Daily Sun.

The political analyst also expressed his doubts that Bangladesh Jamaat-e-Islami is instigating Hefajat from behind the scene.