When will BFF focus on infrastructure development? 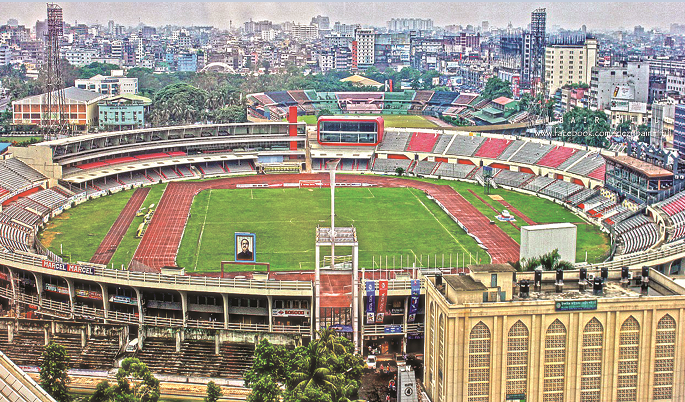 Bangladesh Football Federation (BFF) President Kazi Salahuddin recently said that he has a plan to organise three friendlies against teams like Thailand and Malaysia ahead of the three World Cup Qualifying home matches of the men in red and green.

The four-time BFF chief, who recovered from COVID-19 last week, further said in a press conference that he needed a budget of Tk 6 crore for these friendlies as soon as possible. Salahuddin came up with this plan after Bangladesh conceded a 0-5-goal defeat to upper ranked Qatar in their lone away match of joint qualifiers round two of FIFA World Cup 2022 and AFC Asian Cup 2023 in Doha last Friday.

Bangladesh went to Qatar to play a World Cup Qualifying match with five weeks of preparation. Also, Bangladesh got two lowly local teams there for the practice matches as the top tier Qatari football clubs of Qatar were busy in the ongoing Qatari Professional League, also known as QNB Stars League.

The Qatar tour unearthed the lack of football diplomacy of BFF as they sent a team to play against an upper-ranked team and the Asian champions in a World Cup Qualifier.

Before that, the national team played only two friendlies against Nepal, known as Mujib Barsho FIFA Tier-1 International Friendly Series, after the game returned to the field in November after a long 10-month COVID-19 hiatus in Bangladesh. On the other hand, the Asian champions Qatar were far ahead of Bangladesh in terms of preparation. They played three matches namely against Ghana in October, Costa Rica and South Korea in November. Besides, their booters have been taking part in their professional league. Before and after the match, both head coach Jamie Day and assistant coach Stuart Watkiss marked the differences between these two teams in terms of preparation and football pitch.

Terming Qatar a billionaire team, Bangladesh's football legend Salahuddin added that the Bangladeshi booters needed proper training ahead of each World Cup qualifying game. Salahuddin also felt that he would get expected results by playing some big-budgeted friendlies against some upper-ranked teams. But now the question arises, is playing three big-budget friendlies enough for preparation before these matches? Shouldn't Kazi Salahuddin and BFF need to focus on the infrastructure development of football along with these friendlies to get positive results?

Salahuddin, who led the 21-member electoral panel Sammilita Parishad in the BFF election, said in his manifesto that he would provide the best possible facilities for the national team.  He also promised to set up a modern gymnasium at BFF House, high-profile coaching staff, two artificial turfs in two different venues and at least four venues with international-level facilities countrywide. Besides, he would run year-long training program for both men and women teams, to continue the activities of BFF-Fortis Football Academy and ogranise several age-level competitions.

BFF vice-president Mohiuddin Mohi also felt that they had to improve the infrastructure alongside arranging these big-budgeted matches.

“Big-budgeted matches are important for the national team. They will get experience and gain match temperament by playing against some strong opponents. But we also need to take care of the other sides. I was elected from the opposition panel. But we both have some common promises. We both promised a modern gym, training ground and other facilities for the national team in our respective manifestos. These are part of infrastructure development. I will present these in our next executive meeting. We might not be able to provide facilities available in European nations, but we will try to get something done,” Mohi told The Daily Sun.

BFF will not get the expected results through these big-budgeted friendlies if they avoid the issue of crumbling football infrastructure of Bangladesh. It is a core part of national football.  The former World Cup champions Spain, Asian Champions Qatar, the most successful team in SAFF, India, and other football giants extensively have been working on the grassroots and infrastructure. BFF also should follow their way if they really want to bring revolutionary changes in Bangladesh’s football.