Covid: Most of California under strict new lockdown as cases surge 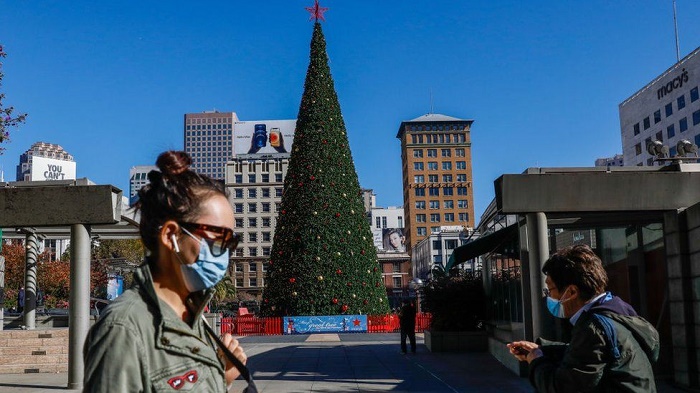 Most parts of the US state of California are under a strict new lockdown, as Covid-19 cases surge across the state and the country.

The stay-at-home order affects around 85% of the state's 40 million people. It will be in place for at least three weeks and cover the Christmas holiday.

Many businesses will be closed, and people will be banned from meeting anyone outside their household.

On Sunday, the US had a record number of people in hospital with Covid-19.

The country has seen a sharp rise in cases and Covid-related deaths in recent weeks. The surge could be partly down to last month's Thanksgiving holiday, when millions of Americans travelled around the US.

The new restrictions in California were triggered by intensive care capacity in hospitals shrinking. The measures came into force at 23:59 local time on Sunday (07:59 GMT on Monday) in the southern part of the state and its central valley.

A local lockdown in San Francisco came into force slightly earlier. Other areas could follow within days.

California's lockdown in March, in which all non-essential businesses were closed, was seen as an early model for the US at the beginning of the pandemic.

What are the new restrictions?

Governor Gavin Newsom has ordered that when capacity at intensive care units in any of five regions of the state goes below 15%, that region will go into lockdown within 24 hours.

The stay-at-home orders triggered in this way will be similar to the far-reaching order issued for the state after the pandemic first hit in March, but with a few significant relaxations:

The lockdown will last for at least three weeks, and until ICU capacity goes above 15% again.

Mr Newsom said the measures would help to "flatten the curve" and reduce the pressure on health services.

"We are at a tipping point in our fight against the virus and we need to take decisive action now to prevent California's hospital system from being overwhelmed in the coming weeks," he said last week.

How did it come to this?

The situation in California reflects a surge in infections nationwide. On Sunday, the state reported an additional 30,000 infections, a new record.

It has recorded more than 1.3 million infections and nearly 20,000 deaths since the beginning of the pandemic.

Intensive care capacity at two of the five regions set up by state officials for the purposes of the stay-at-home order - Southern California and the central San Joaquin Valley - fell below 15% on Friday.

Southern California, which includes Los Angeles and San Diego, the state's two largest cities, fell to 12.5% on Saturday, and San Joaquin to just 8.6%.

What difficulties are the authorities facing?

Republican opponents of the Democratic authorities in the state and many of its municipalities have questioned the efficacy of the new measures, and say they could harm the local economy.

"Every state is experiencing a surge, which begs the question, how do these shutdowns actually reduce cases?" state legislator James Gallagher told Fox News.

Research has found that lockdown measures have been associated with reduced infection numbers, while the World Health Organization also urges people to "avoid spaces that are closed, crowded or involve close contact" during the pandemic.

But some law enforcement officials said they did not plan to help enforce the new rules, with Orange County Sheriff Don Barnes saying in a statement: "Compliance with health orders is a matter of personal responsibility and not a matter of law enforcement."

Meanwhile, Governor Newsom has been facing accusations of hypocrisy. In November he visited a high-class restaurant in the Napa Valley, contrary to his own guidance.

San Francisco Mayor London Breed dined at the same restaurant on a different night. Both have apologised.

But White House press secretary Kayleigh McEnany seized on the errors. "These images... make clear Democrats' mind-set: rules for thee but not for me," she said.

What is the situation across the country?

According to the Covid Tracking Project, 101,487 people were being treated in hospital with the disease on Sunday, while an additional 1,138 deaths were recorded.

Nearly 14.6 million people have been infected with Covid-19 in the US, and 273,374 people have died - the highest figures of any country in the world.

Moncef Slaoui, the scientist in charge of the US push for a vaccine, said there was "light at the end of the tunnel" and that he hoped the Food and Drug Administration (FDA) could give the go-ahead to a vaccine when it meets on Thursday.

But for life to get back to normal by the spring, Americans still needed to follow safety measures, he said in an interview to CBS News on Sunday.

Also on Sunday President Donald Trump announced that his personal lawyer Rudy Giuliani had tested positive for the virus.