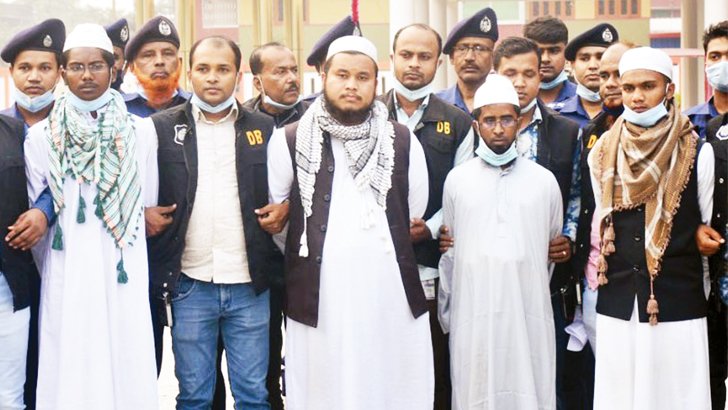 Police are set to request a 7-day remand to grill four people who were arresteed on Sunday for vandalising the under-construction sculpture of Bangabandhu Sheikh Mujibur Rahman on Friday night in Kushtia.

"We will be seeking seven days to question the arrestees in custody," said a senior police official.

The accused will be produced before a Dhaka court on Monday, he said.

Police say two of the arrestees were the perpetrators of the heinous act who have been identified after scrutinising the CCTV footage.

In the surveillance video, the two madrasa students, clad in panjabis and caps, were seen walking towards the under-construction sculpture and climbing up a ladder around 2am on Saturday before smashing it with hammers.

Police first arrested Abu Bakar and Nahid and later picked up Alamin and Yusuf based on information gleaned from the former duo.

Miscreants vandalised portions of the face and hands of the under-construction sculpture of Bangabandhu in the district town of Kushtia in the early hours of Saturday.