These structures used for carrying ads without tax 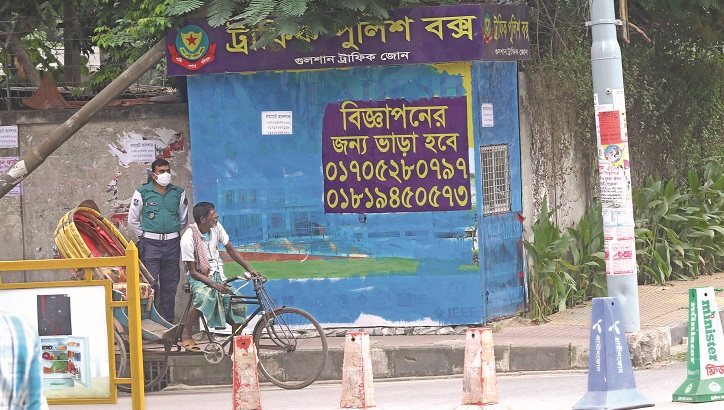 A large number of police boxes have been set up on footpaths and road dividers in the capital, which obstruct the smooth movement of pedestrians and often lead to accidents.

A section of officials are doing illegal business, using police boxes for advertisements. They are dodging huge taxes on advertisements on these structures.

Urban experts said the police boxes on footpaths and road medians cause accidents as pedestrians are forced to jaywalk on the streets.

“Obstructing traffic on roads and movement of pedestrians on footpaths is the same offence,” he said.

Top officials at Dhaka Metropolitan Police (Traffic) assured earlier that these police boxes will be dismantled for smooth movement of pedestrians, but it was not implemented, he added.

“These police boxes are built at risky locations. They (the boxes) limit the eye sight of pedestrians, resulting in accidents,” he also said.

They also said different companies are running advertisements on police boxes, road barriers and other structures without any approval, depriving the government of a huge amount of revenue.

The Section 298 Ideal Tax Schedule, 2016 provides that a company or an individual must seek permission or pay fees to the city corporation for any advertisement.

Sources said the DSCC has set up only 55 police boxes while the DNCC 13 ones in the capital.

The DSCC Traffic engineering department also said they set up 55 police boxes in 2016 and 2017 on footpaths and road dividers.

DMP source said it has 45 police boxes under the DNCC and 62 others under the DSCC. But, actually the number is much higher.

During a recent visit to different areas in the capital, it was found that police boxes on footpaths and road medians obstruct the movement of vehicles and pedestrians. Different companies put advertisements on these structures to dodge tax.

The DSCC and the DNCC have recently demolished a number of illegal police boxes in Dhanmondi and Gulshan areas in the capital.

During a spot visit, it was found that there is a police box on a footpath on Road 23 in Banani, which asks for advertisements.

Introducing him as manager of Mermaid Enterprise, Md Ahad told the Daily Sun that they construct police boxes in the capital and rent them for advertisements to different companies and individuals.

He also said they inform both police and officials of the city corporations before constructing any police boxes.

It was also seen that opposite footpath to the Bangladesh UAE Moitree Complex on Kemal Ataturk Avenue, though the DNCC puts a sign of stop stoppage, there has a an additional sign of police of Gulshan division which is totally unnecessary.

Talking to the Daily Sun, DMP Additional Commissioner (Traffic) Abdur Razzak said, “We’ve constructed some police boxes where there has no police box for on-duty officials in the city.”

Asked about the advertisements, he said, “I don’t know about the business and the DMP doesn’t allow anyone such business.”

“We didn’t give permission to anyone to set up or rent police boxes,” he said.