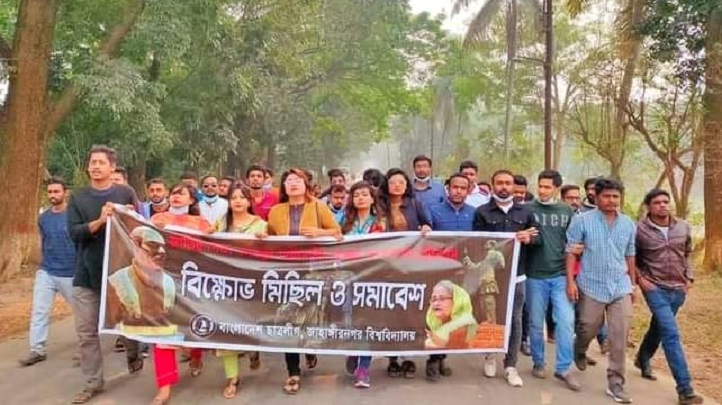 Bangladesh Chhatra League (BCL),  Jahangirnagar University (JU) unit has demonstrated on the university campus protesting against the vandalism of an under-construction sculpture of Bangabandhu Sheikh Mujibur Rahman in Kushtia.

The leaders and activists of the ruling party’s student wing brought out a procession from near the transport office of the university this noon.

After parading different streets on the campus, the procession ended with a brief rally at the Joy Bangla gate area adjacent to Dhaka-Aricha Highway.

At the rally, protesters demanded the exemplary punishment of those involved in such reprehensible activities.

While addressing the rally, M Mainul Islam Rajan, joint office secretary of JU BCL said, “We will not accept any disrespectful treatment against Father of the Nation Bangabandhu Sheikh Mujibur Rahman in this land. Those involved in this incident must be brought to justice and exemplary punishment must be ensured."

Amid growing opposition from some Islamist groups, including Hifazat-e Islam, to sculptures and statues, miscreants vandalised an under-construction sculpture of Father of the Nation Bangabandhu Sheikh Mujibur Rahman in Kushtia city early Saturday.

The face and hands of the sculpture were damaged.

The incident sparked protests across Bangladesh.