Maradona: Why the football icon's inheritance could be messy 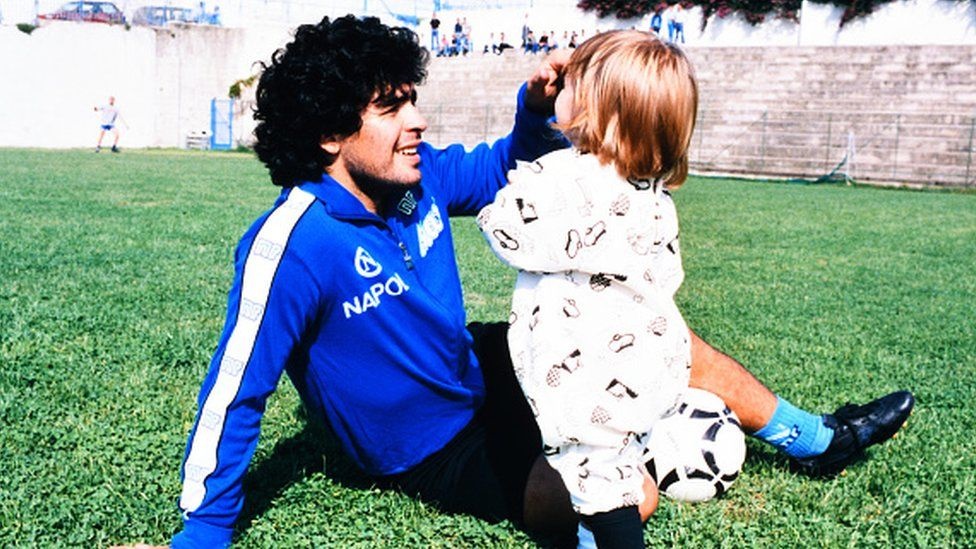 A portfolio of properties, lucrative image rights, and an amphibious tank from Belarus.

These were just some of the reported trappings of Diego Maradona's fortune.

The Argentine football icon died at 60 last week, leaving behind a complicated financial legacy that echoes his at times troubled personal life.

Since Maradona's death there has been rampant speculation about his wealth and the heirs entitled to a share of it.

Maradona had a big family, fathering at least eight children over decades of romantic entanglements with six different women. His inheritance is expected to be divided equally among those children.

But with no reports of a will, Argentine legal experts and journalists say the inheritance will be far from straightforward.

They expect a protracted court battle fraught with family disputes, DNA tests and opportunistic claims of paternity as lawyers scramble to calculate the true value of Maradona's estate.

"I predict that the inheritance process will be a mess," Elias Kier Joffe, a lawyer based in Argentina's capital Buenos Aires, told the BBC. "I suspect it will take some time to sort out."

So, who are Maradona's children?

Paternity revelations were a common theme of Maradona's colourful life.

One of his daughters once joked the former attacking midfielder could almost make up a football team's full starting 11 with his ever-growing brood.

For years Maradona denied having any children besides Gianinna, 31, and Dalma, 33, both daughters he had with ex-wife Claudia Villafañe, whom he divorced in 2003 after nearly 20 years of marriage.

Maradona recognised Diego Junior, 34, and Jana, 24, as his flesh and blood in the mid-2010s after court battles with their mothers, with whom he had had affairs.

There was no such paternity dispute over the 2013 birth of his second son, seven-year-old Diego Fernando.

Maradona recognised Diego Junior, 34, and Jana, 24, as his flesh and blood in the mid-2010s after court battles with their mothers, with whom he had had affairs.

There was no such paternity dispute over the 2013 birth of his second son, seven-year-old Diego Fernando.

Indeed, Mr Lara's lawyer has already asked a court to exhume the footballer's body to collect a sample for a DNA test. Still, even if Mr Lara and Ms Gil did establish a paternal link, it is not clear how much they would receive in inheritance.

There is no comprehensive account of Maradona's wealth, but in some speculative reports, media outlets have used two metrics.

The first estimates the total value of all Maradona's assets, from his sports cars to his jewellery.

An inheritance worth between $75m (£55m) and $100m is one estimate that has been widely cited by Argentine media. This was referenced, without attribution to a source, in an article written by Julio Chiappetta, an Argentine sports journalist who was close to Maradona.

The second metric is Maradona's net worth which, put simply, is the sum total of what a person owns (their assets) minus what they owe (their liabilities).

Maradona had an estimated net worth of $500,000 at the time of his death, according to Celebrity Net Worth, a website that reports on the wealth of famous people. The website says its net-worth estimates are based on "financial analysis, market research, and inside sources".

Some of the assets Maradona is widely reported to have owned include:

At least five properties in Argentina but, as Mr Joffe said, "no Beverly Hills mansion"

Celebrity Net Worth says Maradona earned "tens of millions of dollars from salaries and endorsements" during his career as a player and a manager.

A large portion of this wealth came from his contract with Italian football club Napoli where, according to a 1990 report by the New York Times, he drew $3m in salary, plus another $8m to $10m in endorsements.

Italy both made and broke Maradona, giving with one hand and trying to take away with the other. In 2005, the Italian government said Maradona owed 37.2m euros (£32m; $48.6m) in unpaid taxes dating back to his Napoli days.

To this day, the vast majority of the debt remains unpaid.

Maradona refused to pay it and, had he lived longer, may have continued to do so. Nevertheless, the tax bill was still a major liability. This was factored into the estimate by Celebrity Net Worth, hence the seemingly low $500,000 figure.

"Definitely poor," Ventura said. "He liked to spend, and when someone asked him for money, he gave it."

How will his inheritance be shared?

Throughout his life Maradona had some very public disputes with ex-partners and his children, with all sides airing their grievances on social media or Argentine TV.

Maradona's health and wealth were often the twin sources of contention. In November 2019, for example, Maradona alluded to his inheritance after his daughter Gianinna expressed concerns about his health on social media.

"I tell you all that I'm not going to leave anything behind, I'm going to donate it," Maradona said in a video posted to YouTube.

Under Argentine law, however, a person can only give away a third of their assets in a will, with the rest passed on to their children or spouse.

Since Maradona does not appear to have left a will, and had no spouse at the time of death, his children should, in theory, receive an equal share of the entire estate.

"The culture of Argentina is not to draft a will. Most people don't," Mr Joffe said.

The BBC did contact Maradona's lawyer, Matías Morla, to ask about the will and other inheritance issues, but at the time of publication, there had been no reply.

Without a will, things get a bit technical.

Maradona's apparent heirs - recognised or not - can file a claim for a share of his inheritance in court nine days after his death on 25 November. Argentine media reports suggest Jana, Maradona's third daughter, was the first to do so on Thursday.

A judge will then decide "who takes what" before issuing what's known as the declaration of heirs, Sebastian Limeres, a lawyer who specialises in inheritance, told the BBC. This could take months.

In the meantime, "we can't predict if the heirs are going to get along well", Mr Limeres said.

After all, you can't choose your family. That, some might say, is decided by the hand of God.