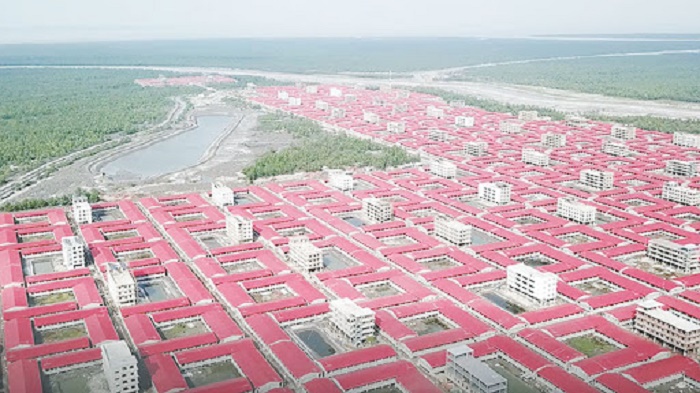 Bhasan Char, an island in the Bay of Bengal, has emerged as a new window of opportunities for the country’s tourism sector with its abundance of refreshing natural scenery, lush green and sea view.

Those who love tranquillity and want to spend some time in the lap of nature surrounded by the sea will find Bhasan Char as an experience of a lifetime.

Bangladesh Navy is developing a mega project on the island including residential projects for underprivileged ones and developing a strategic plan for developing the remote island as a tourism site.

Officials related to the development of the rehabilitation project mentioned that Bhasan Char is accessible for all.

The Island is located under Noakhali, some 21 nautical miles from the Chairman Ghat of the district. By engine trawlers, many people from adjacent Hatiya make day-long trips to the island.

“We have forwarded a plan to Prime Minister Office for developing tourism site in Bhasan Char. A delegation of the parliamentary committee on the ministry of defence visited the island for assessing possibilities of a tourism site around two months ago. We will work together with respective authorities including Tourism Board for developing the site,” Md Anwarul Kabir, deputy project director of Ashrayan -3 project, told the Daily Sun.

There are two helipads on the island. Also, passenger ships regularly travel between the island and Chattogram.

The lighthouse built on the Bhasan Char is known as Beacon of Hope and offers a bird’s eye view of the island and the sea from the top of a 90-metre high tower. Local and international ships keep the lighthouse in measurement which can scan up to 13 nautical miles on the sea.

Some 1 million mangrove trees including Geoa, Keura have been planted on the bank of the Island for protecting the site from the strong tide. Besides, there are verities of trees including pine trees, bamboos, banyan, coconut, date, jackfruit, tamarind, banana, mango and dragon trees.

“There is the sea on one side. Besides, the mangrove trees give additional attraction to the island. There is a huge area of forest in the island which can be developed as a wildlife sanctuary,” a retired navy official told Daily Sun requesting not to be named.

Citing research of Dhaka University, the retired navy official also recommended for assessing possibilities of setting up an airstrip in the island to make a journey break on flights between Dhaka and Chattogram to expand tourism in Bhasan Char.

For protecting the site from the strong tide, there are 9-meter-high embankments which will be improved to 19-meter very soon, according to the officials.

Tour operators mentioned that the tourism site can attract travellers if communication facilities alongside of necessary infrastructure including hotel, catering service are made available.

“If there are communication facilities, tour operators are ready to offer services to any destination. We should develop hotels for accommodation, food catering and site-viewing services to expand the tourism footprint in Bhasan Char,” Tour Operators Association of Bangladesh (TOAB) President Md Rafeuzzaman told the Daily Sun.

Bhasan Char s located at the northern end of the Bay of Bengal and the mouth of the Ganges-Brahmaputra-Meghna river system.