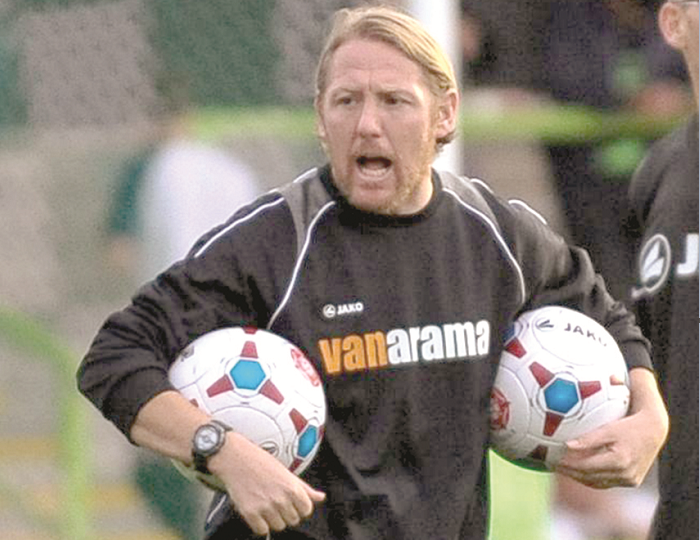 Bangladesh head coach Jamie Day said that he was not disappointed with the defeat of his side against the Asian Champions Qatar but only disappointed to concede five goals.

The men in red and green conceded 0-5 goals defeat to Qatar in their lone away match of joint qualifiers round two for FIFA World Cup 2022 and AFC Asian Cup 2023 at Abdullah bin Khalifa Stadium, also known as Duhail Stadium, Friday night. Forwards Akram Hassan Afif and Almoez Ali Abdulla scored twice each while midfielder Adbel Aziz Hatim netted one for the winning side.

Bangladesh booters were expected to return to Dhaka on Sunday at 2:00am. Head coach Jamie Day and assistant coach Stuart Watkiss would fly for England. Goalkeeping coach Les Cleevley, fitness coach Ivan Razlog and physio Andre Juan Carle would return to their homes in England and Australia as their short-term contracts with Bangladesh Football Federation (BFF) has expired.

After conceding the defeat with a massive margin of goal against the Asian Champions, Jamie said, “I’m not disappointed with the defeat. They (Qatar) are Asian champions, the best team in Asia. We expected to lose by two-nil or three-nil. My only disappointment is we conceded the fifth goal, one more goal in injury time. I didn't think about five goals, I think about four.”

At the Duhail Stadium, midfielder Adbel Aziz opened an account for the hosts with a right-footer inside of the box, off a cross from defender Abdelkarim Hassan Fadlalla in the 9th minute (1-0). Qatar forwards put full pressure on the Bangladeshi defense and netted the second goal in the 33rd minute. Forward Afif doubled the margin with an eye-catching powerful close-range right-footer from inside the box (2-0).

After conceding two defeats, Bangladesh defenders fought hard not to concede any goals in the first half. Goalkeeper Anisur Rahman Zico brilliantly saved two or three attempts of Qatar attackers. Qatar continued their domination in the second half, but youngster Zico wasted all of their efforts.

Qatar got the breakthrough in the 72nd minute while midfielder Biplo Ahmed wrongfully tackled substitute forward Moayed Hassan inside the box. Forward Almoez made no mistakes to convert the ball correctly while referee Mohd Bin Yaacob rewarded the home side with a penalty (3-0).

Just after six minutes, Almoez scored his second goal, off a cross from midfielder Abdel Aziz Hatim (4-0). Just a few minutes before the final whistle, forward Afif scored his second goal utilising a pass from substitute Abdullah Asbulsalam Alahrak in the 92nd minute (5-0). However, Qatar made five changes while Bangladesh four in the day’s game.

Comparing Qatar, Bangladesh head coach further said that his side did well in terms of preparation ahead of the match. “I’m really proud of the boys, playing against Asian champions, they defended them very well. Just disappointing is conceding the fifth goal. They (Qatar) have been training for four months; we have trained for five weeks. And ultimately I think the boys have been absolutely brilliant.”

Jamie also appreciated youngster Zico’s performance and three world-class saves. “Zico was fantastic tonight; three world-class saves. Through his international debut and a game like this, I think it is unbelievable for someone a 20-21 year player. If you look at the team tonight, 21-22 years of the whole team. They gave 100 percent; this is what I asked for. And they worked extremely hard in a short space of time to play against a very good team. Also, we gave some youngsters the opportunity to play in world cup games.”

Qatar head coach Felix Sanchez also praised Zico’s performance and said, “I think Bangladesh coach is happy or not with him. From us, he made two or three saves, those were almost goals. I think he did well. It is five goals but we could have more than it.”

In their first-leg match, Bangladesh conceded a 0-2 defeat against the Asian champions Qatar at Bangabandhu National Stadium on October 11 last year. Despite conceding the defeat against Asian Champions, the men in red and green gave their best at BNS.

After a long COVID-19 break, the men in red and green returned to the field with a two-match Mujib Borsho FIFA Tier-1 International Friendly Series against Nepal in November. Bangladesh claimed the series 1-0 beating the touring side by 2-0 goals in the first match on Nov 13 and playing a goalless draw in the second match on Nov 17, both in Dhaka.

The team, which reached Qatar on Nov 19, started training there after a three-day quarantine period and played two more practice matches against two local amateur teams. Booters lost both matches conceding 2-3 goals against Qatar Military in the first match on Nov 25 before conceding a 0-1 goal against the second division club Lusail Sports Club in the second match on Nov 28.