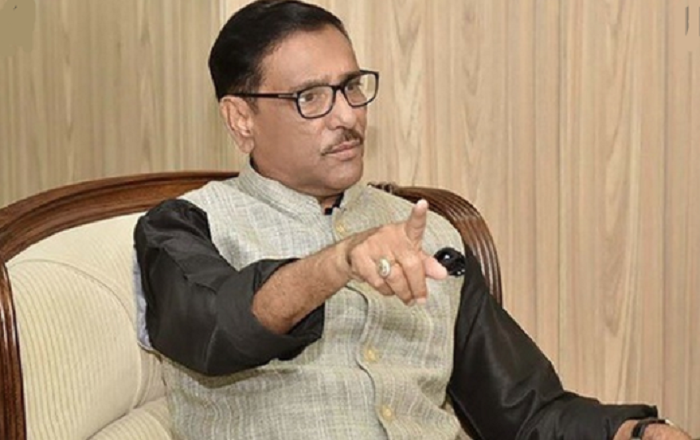 Awami League General Secretary Obaidul Quader said on Saturday no political party other than the AL practices democracy inside the party though it is needed to give the country’s democracy an institutional shape.

He said this while talking to reporters after paying tributes to Huseyn Shaheed Suhrawardy by placing a wreath at his grave at ‘Tin Netar Mazar’ near Doyel Chattar here on the late leader’s 57th death anniversary.

Quader, also road transport and bridges minister, said Suhrawardy had struggled for democracy until his death and wanted to give an institutional shape to democracy.

Though democracy got freed today, it could not get an institutional shape due to the evil efforts of a vested quarter, he added.

“On this death anniversary of Huseyn Shaheed Suhrawardy, it will be our pledge to give an institutional shape to democracy,” he said.

Pointing to BNP, the minister said a quarter always talks about democracy but their behaviors never reveal that they believe in democracy.

“Though they talk about democracy, actually they are enemy of democracy. It cannot be expected from those who do not practice democracy within their own party, will establish democracy in the country,” he said.

About the criticism over the sculpture of Father of the Nation Bangabandhu Sheikh Mujibur Rahman, he said Prime Minister Sheikh Hasina is handling the matter.

“We are in power. It will not be wise to show impatience abruptly over any issue. The prime minister is handling the matter. She will face everything with courage as like as she tackled coronavirus pandemic,” he added.

Quader said there are sculptures in many countries across the world and even in Muslim countries as well.

If establishing sculptures is not conflicting with Islam in those countries, why it will be in Bangladesh, he questioned.

Earlier, Awami League leaders and workers led by the party’s general secretary paid tributes to Huseyn Shaheed Suhrawardy by placing a wreath at his grave.