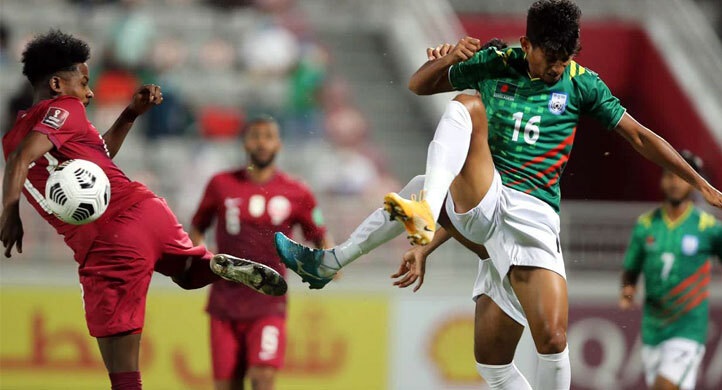 Despite a magnificent performance by custodian Anisur Rahman Zico under the bar, Bangladesh suffered a massive 0-5 goal defeat to mighty Qatar in their group E match of FIFA World Cup 2022 Qatar

Qatar dominated the entire proceeding by taking 2-0 lead at the breather.

Goalkeeper Anisur Rahman Zico was superb under the bar by saving his team from two certain goals while the other one attempt returned to play after hitting the side bar.

Most of the first half Qatar dominated at the Bangladesh border by launching attacking one after another. The hosts had to wait for few minutes to take the lead in the very ninth minute through their midfielder Abdelaziz Hatem while striker Akram Hassan Afif doubled the lead for Qatar in the 33rd minute of the match.

After the resumption, Qatar came with more organized way and added another three goals in the second half. Striker Almoez Ali scored the third goal for Qatar in the 72nd minute. Referee awarded the spot kick to Qatar as Biplo fouled substitute Muayed Hassan in the danger zone. Almoez made no mistake to convert the spot kick.

Almoez further widened the team’s margin scoring his second and fourth for Qatar sending the ball to the open net with a brilliant header after utilizing a cross from Hatem in the 78th minute.

Qatar dominated the entire proceeding and notched their deserving victory while Bangladesh were totally off-colored and hardly failed to create any scoring chance during the proceeding.

Afif finally sealed the victory scoring his second and fifth for Qatar in the 92+2nd minute of the match.

Earlier, in the home match, Bangladesh suffered a 0-2 goal defeat to Qatar held in Dhaka.

Qatar maintained top position in group E with 16 points while Bangladesh placed at bottom-ranked having one point from five outings.

After the match, Bangladesh head coach Jamie Day, however, not disappointed with the result because Qatar is an Asian Champions and best team in Asia got four months to prepare themselves while Bangladesh got only five weeks for training.

He said the boys were absolutely brilliant and he is happy with the result though the Bangladesh head coach expressed a little bit disappointed for the fifth goal which Bangladesh conceded in the injury time of the second half.