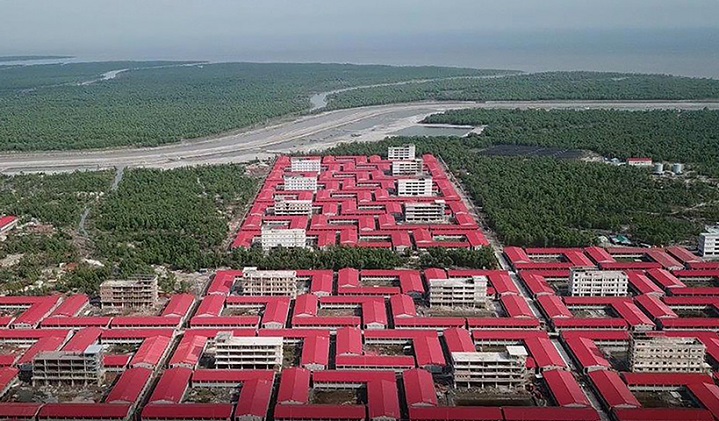 Sayed Ullah, one of the Rohingyas landed in Bhasan Char on Friday, could not hold his feelings of extreme happiness seeing all the facilities there and kept calling relatives back in Cox's Bazar camps to join the next batch.

"Alhamdulillah. We are extremely happy. I had never imagined that such a beautiful place is waiting for us with so many facilities," he told UNB over phone.

Syed made dozens of phone calls to his relatives and friends who are still living in Cox's Bazar camps and encouraged them to join the second batch without any hesitation.

"I kept calling them. That's the first thing I did after my arrival in Bhasan Char," he said.

The 30-year-old Rohingya man along with his wife, three daughters and only son reached Bhasan Char in the afternoon.

"Nobody did force us to come here. I came here voluntarily. Everybody will be willing to come here once they see the facilities," he said.

The Rohingya man said he had a little bit of  fear in mind and prayed to Almighty Allah all the way to Bhasan Char by ship. "We are more than happy now. Everybody looks happy here. We thank Allah as we got more than what we thought of."

His brothers and sisters are still in Cox's Bazar though many distant relatives are also with him in Bhasan Char.

In the face of growing concern over the extreme congestion in the camps of Cox’s Bazar and to avert any risk of death due to landslides and other unwarranted incidents, the government has decided to relocate, in phases, 1,00,000 Rohingyas to Bhashan Char.

Accordingly, in the first phase, more than 1600 Rohingyas, who expressed their willingness voluntarily for relocation, were shifted to Bhashan Char on Friday.

The Rohingyas were brought to Chattogram by buses and kept in a school at night.

They had dinner and started for Bhasan Char in the morning after having breakfast.

The first batch reached the Bhasan Char around 3pm.

"We are going to Bhasan Char. Nobody did force me or other members of my family," one of the Rohingya mothers said expressing satisfaction over their relocation from the crowded camps.

The relocation has become imperative to decongest the overcrowded camps in Cox’s Bazar that have temporarily been accommodating nearly a million of Rohingyas with many more thousands born each year, said the government.

It said the deteriorating security situation due to prolonged stay of these frustrated people in Cox’s Bazar also compelled the government of Bangladesh to come up with a contingency plan and develop Bhashan Char from its own budgetary allocation.

Accordingly, the government invested more than USD 350.00 million to develop the island.

In contrast to the makeshift structures of the camps in Cox’s Bazar, the accommodation in Bhashan Char is strongly-built with concrete foundation which can withstand natural disasters such as cyclones and tidal waves, said the government.

Super Cyclone Amphan proved the strength of the structures of Bhashan Char, it said.

Contrary to the apprehension of some quarters about the feasibility of the island, Bhashan Char stood firm against the massive storm, said the government.

Despite the heightened tidal wave, all the 1,440 houses and 120 shelter stations in the island remained unharmed, the statement said.

The island is connected with the mainland through waterways.

The MoFA said the government of Bangladesh has ensured adequate supply of food along with proper sanitation and medical facilities for Rohingyas in Bhashan Char.

Appropriate hospitals with highly-qualified health professionals, adequate Covid  testing and treatment facilities are there in place, it said.

In addition to government agencies, around 22 NGOs are already there to extend all possible support to the relocated Rohingyas.

Adequate security has been ensured in the island by deploying police personnel, including policewomen, and the area is fully covered with CCTV cameras.

On the relocation, the government said its position was very clear and transparent from the very beginning that any relocation would be entirely on a voluntary basis.

Accordingly, a good number of Rohingya representatives undertook a “go-and-see” visit to Bhashan Char to see the facilities and make an independent and informed choice, MoFA said.

A number of NGOs and journalists also visited the island.

All of them expressed their high satisfaction at the available facilities in Bhashan Char, MoFA added.

A media team and a group of senior journalists are already in Bhashan Char.

The relocation is part of the broader plan of repatriation which is the only priority for the Government of Bangladesh.

The MoFA said the skill development and livelihood opportunity that the Rohingyas would be able to avail in Bhashan Char would prepare them for their reintegration in the Myanmar society on return.

The types of economic activities such as fishing, agriculture, goat rearing, etc that they used to pursue in Rakhine state are available in Bhashan Char.

Repatriation attempter failed twice in November 2018 and August 2019 amid Rohingyas' lack of trust in the Myanmar government.

Bangladesh thinks Rohingyas will "jeopardise regional and international security" if the 1.1 million Rohingya people are left unattended and not given the opportunity to return to their homeland.