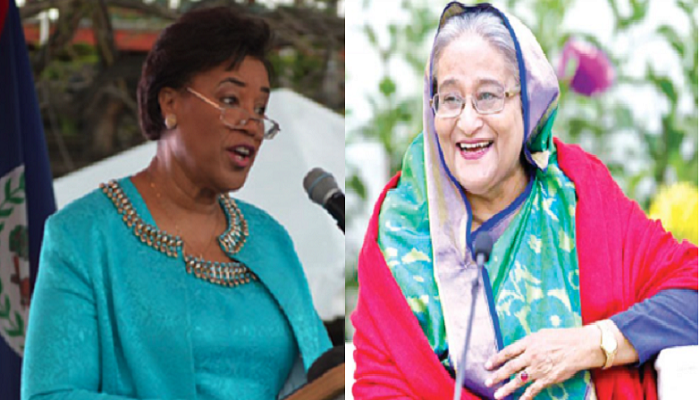 “Sheikh Hasina deserves full credit for the incredible achievements of her government since she has been prime minister,” she said in an exclusive virtual interview with BSS following a high-level dialogue jointly organized by Bangladesh High Commission in the UK and Commonwealth Secretariat in London last week.

The top Commonwealth official said many current world leaders may learn from Sheikh Hasina’s leadership that secured Bangladesh’s positive growth amid pandemic even while the country was shouldering the burden of over a million Rohingyas who fled their homeland in Myanmar to evade persecution.

“As the leader (Sheikh Hasina) of a developing country listed as one of the most vulnerable in the world to natural disasters, her actions demonstrated that development does not need to come at the cost of our
humanity, and that compassion should be a key feature of leadership,” she said

Scotland, who now serves as Commonwealth’s sixth secretary-general added: “This is a lesson many leaders today can learn from (Sheikh Hasina).”

The dialogue covered the issues, including the Commonwealth’s deeper engagement with its member states particularly with Bangladesh to help face the challenges from Covid-19.

The Commonwealth is a voluntary association of 54 independent and equal countries, nearly all former territories of the British Empire. It is home to 2.4 billion people, and includes both advanced economies and developing countries.

The members of the association work together to promote prosperity, democracy and peace, amplify the voice of small states, and protect the environment.

“I commend Sheikh Hasina and her government for achieving that,” she said.

The Commonwealth secretary-general said Bangladesh has steadily improved its economic and development prospects, and is expected to graduate from least developed to developing country status in 2024.

In the last decade alone, she continued, Bangladesh’s economy grew in size by 188 percent averaging 6-7% growth per year while a key feature of the country’s economic landscape is ensuring 100 percent ICT access for people at grassroots levels.

Scotland said in an increasingly digitalised world this could support economic growth at community levels and more equitable wealth distribution through increased access to e-commerce and other digital platforms.

The Commonwealth secretary general observed that Sheikh Hasina has been carrying the legacy of leadership as able daughter of Bangabandhu Sheikh Mujibur Rahman, the founding father of Bangladesh.

“I think the seeds for that (Bangladesh’s success) were sown by her (Sheikh Hasina’s) father Bangabandhu Sheikh Mujibur Rahman, who first foresaw and advocated a future for an independent and economically viable Bangladesh,” she said.

Scotland said Bangabandhu had faced unenviable and difficult task of building a new nation from the ashes and destruction of the war for independence.

“It is no accident that he was voted the Greatest Bengali of All Time in the BBC organised poll in 2002,” she said.

The Commonwealth top executive recalled that Bangabandhu was instrumental in building the foundations for the modern state of Bangladesh, and for carving a place for Bangladesh on the international stage, including in the Commonwealth, which Bangladesh joined in 1972.

A Dominican by nationality, Scotland is the 2nd secretary-general from the Caribbean islands and the 1st woman to hold the position.