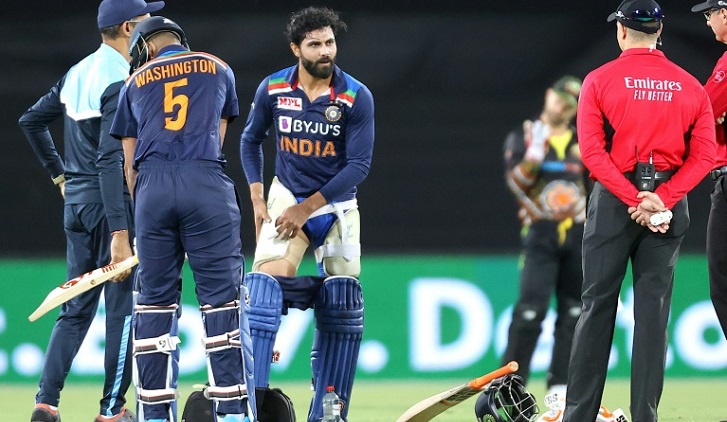 A hobbling Ravindra Jadeja smashed 44 runs from just 23 balls to help India to 161 in the opening T20 clash against Australia at Canberra's Manuka Oval on Friday.

Jadeja came to the crease with India struggling to post a competitive total and appeared to strain his hamstring when he was on 18.

But although limping badly, he smashed the Australian attack to all corners, scoring 30 runs from his final 10 balls to allow his side to post a competitive total.

Mitchell Starc, who had been disappointing in the ODI series, struck in his second over when he bowled Indian opener Shikhar Dhawan with a beautiful outswinger to leave the Indians 11 for one.

Fellow opener KL Rahul began to take control with some powerful hitting, but with the score on 48, Indian captain Virat Kohli fell for just nine when he tamely chipped a Mitchell Swepson short ball back to the bowler, the young leg-spinner taking an easy catch.

Sanju Samson played some big shots on his way to 23 off 15 balls before he hit a Moises Henriques delivery straight to Swepson at mid-off to leave India at 86 for three.

It was soon 90 for four in the 13th over when Manish Pandey got a top edge to leg-spinner Adam Zampa, with Josh Hazlewood taking a sharp catch at short third man.

India were in further trouble when Rahul holed out to Sean Abbott at long-on, leaving them 92 for five at the end of the 14th over.

Any chance India had of getting to a big total seemed to have disappeared when Hardik Pandya was caught at long-off for 16, leaving the visitors 114 for six with only three overs remaining.

But some huge hitting from the injured Jadeja in the last three overs gave the Indian bowlers something to defend.