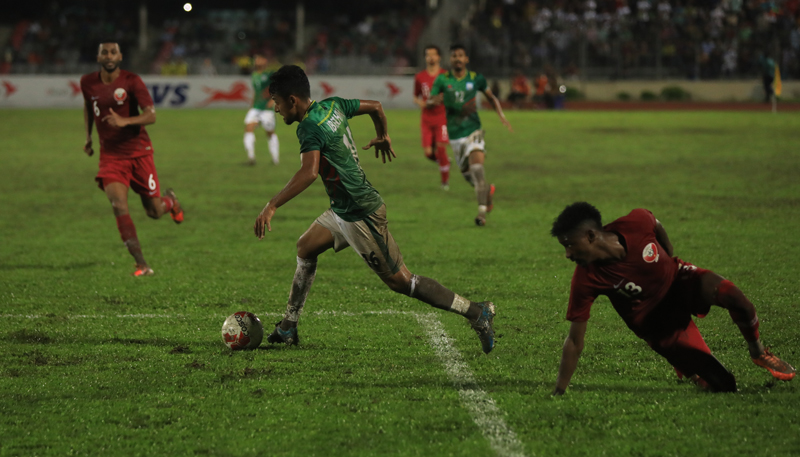 Bangladesh will play their lone away match of joint qualifiers round two of FIFA World Cup 2022 and AFC Asian Cup 2023 against Qatar at Abdullah bin Khalifa Stadium on Friday at 10:00pm (BDT).

Bangladesh Head coach Jamie Day, who went to Doha to join the rest of the team on Wednesday, told the reporters that his side are ready to give their best performance and would make the game very difficult for Qatar.

“We know Qatar. They are the best team in Asia and should win the match. It would be very disappointing if they did not win it. For us, we have to make sure to put on a good performance and have to make it very difficult for them to get their expected result. It is a difficult match. Qatar are expected to win but we are going to do our best,” Jamie said on Thursday.

After a long COVID-19 break, the men in red and green returned to the field with the two-match Mujib Barsho FIFA Tier-1 International Friendly Series against Nepal in November. Bangladesh claimed the series 1-0 beating the touring side by 2-0 goals in the first match on November 13 and playing a goalless draw in the second match on November 17, both at Bangabandhu National Stadium (BNS).

The team, which reached Qatar on November 19, started practicing there after a three-day quarantine period and played two more practice matches against two local amateur teams. Booters lost both matches.

Jamie joined the team a day before the match as he was sidelined after testing corona positive on November 15. He finally reported negative on Tuesday after several tests. He is expected to be in the dugout.

Bangladesh will not make many changes in the playing eleven. The head coach is expected to repeat the formation against Nepal (4-2-3-1) in the match against Qatar. Despite conceding defeats in both practice matches, the head coach believed that they would perform their best against their mighty opponents.

“The boys are trying very hard in the last five weeks, credit goes to them. We got them in the best possible shape within a time frame. We are looking forward to the game on Friday. It is a really good game to be involved in and will be a great experience for the players. It will be an extremely tough game. We are looking forward to it. Hopefully we can perform to the best of our ability and make Bangladesh very proud,” Jamie added.

Bangladesh were scheduled to play against Qatar on October 13, but AFC, with permission of FIFA, postponed the match until 2021 due to travel restrictions of different countries in the wake of COVID-19 outbreak. But they added that the participating nations can play their respective matches with mutual consent. Qatar took the opportunity and sent proposals to opponent nations. Among them, Bangladesh Football Federation (BFF) agreed to the proposals.

In their first-leg match, Bangladesh conceded a 0-2 goals defeat against the Asian champions Qatar at Bangabandhu National Stadium (BNS) on October 11 last year. Despite conceding the defeat against Asian Champions, the men in red and green gave their best at BNS. The team was fully prepared and had been playing professional leagues regularly. Also, they outplayed Bhutan in the two international friendlies ahead of the game.

“We played well in the last game against Qatar. The condition suited us and playing at home made the match very difficult for them. It was very unlucky to lose. But now this would be different, the match would be a fantastic pitch in Qatar. The condition will favour Qatar. We know we have to play extremely well and we worked hard in the last five weeks, so we are already fit to go and looking forward to playing Qatar on Friday,” the head coach added.