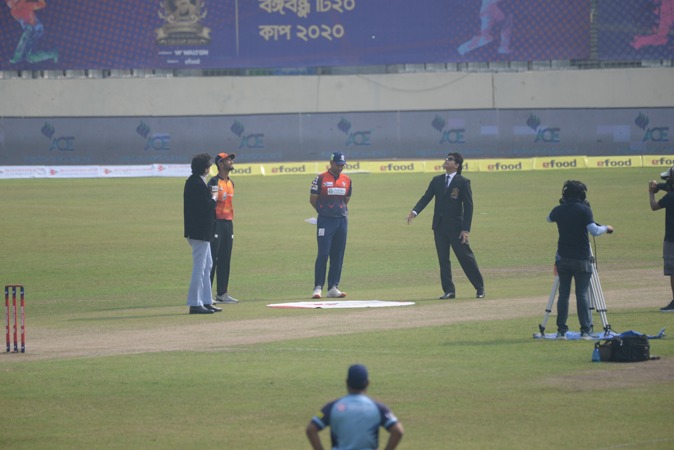 Fortune Barishal captain Tamim Iqbal won the toss and elected to bowl first in their fifth match against Gemcon Khulna in the Bangabandhu T20 Cup at Sher-e-Bangla National Cricket Stadium on Friday.

Khulna, a star-studded team bolstered with the likes of Shakib Al Hasan, Mahmudulllah Riyad, made a decent start to the tournament with a four-wicket win over Fortune Barishal in the first leg. They achieved full two points but the victory was such hard fought and came by a touch of luck that they were criticized even for the victory.

They in fact earned the victory from the jaws of the defeat as Ariful Haque produced a unbelievable innings by hitting four sixes in five balls when Khulna needed 22 runs to win in the last over.

Khulna then lost two consecutive matches against Minister Group Rajshahi and Gazi Group Chattogram before bouncing back to the winning way with a victory over Beximco Dhaka in the last match. They are now sitting at third position in the point table with four points.

However to improve their position, they are aiming to hand struggling Barishal a defeat yet again.

Fortune Barishal however had just one win in four matches, which left them in fourth position in the five-team tournament. They and Dhaka have same two points but Barishal avoided bottom table due to good run rate.

But Tamim Iqbal-led side knew that they couldn’t afford another defeat if they want to keep them in the last four races.