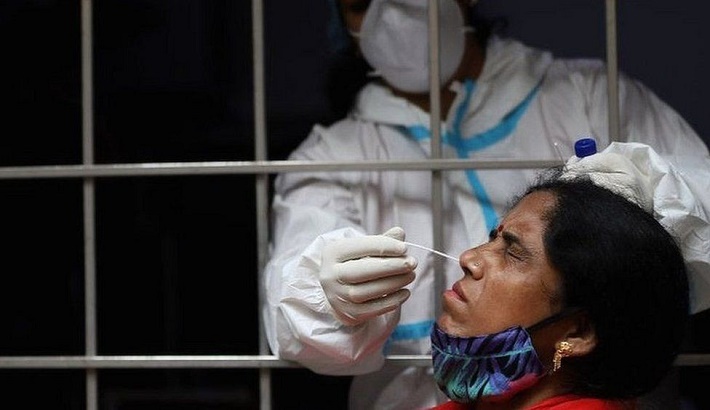 Indian Prime Minister Narendra Modi has called on the country's worst-affected states to give top priority to testing and contact tracing to combat coronavirus.

Daily cases in India have been falling since mid-September, but there's concern that varied testing strategies may be hindering the battle against the disease.

What type of testing is India doing?

India had been using the what's known as a PCR test - regarded as the gold standard of testing - very widely.

But currently, only 60% of all tests use this method, and many Indian states - who are in charge of their own health policies - have switched to rapid antigen testing (RAT), a faster but less reliable method.

How does mass testing work?

RAT tests are known to miss up to 50pc of cases due to false negatives (where infected people are not detected), although some experts believe they are still useful in areas which have become virus hotspots.

"The ability to detect cases depends on a relative mix of the less sensitive RAT test and the gold standard PCR test," says Prof Gautam Menon, an infectious disease expert from Ashoka University in Haryana.

India isn't alone in using these tests, and some European countries grappling with further waves of infection have also resorted to rapid testing.

Is testing consistent across the country?

Maharashtra is the worst-affected state in India, with 17% of all cases.

In terms of total coronavirus cases, it's followed by states with significantly smaller populations such as Karnataka, Andhra Pradesh, Tamil Nadu and Kerala.

But Uttar Pradesh and Bihar - two other states with large populations - appear to be doing much better.

They have lower proportions of confirmed cases at 2.9% and 1.6%.

What the testing data reveals is that in both Bihar and Uttar Pradesh (and some other states) less than 50% of total tests use the PCR method - so cases are being missed.

In Maharashtra, nearly 60% of tests have been PCR tests (although they are increasingly using rapid testing in the state capital, Mumbai.)

And Tamil Nadu state has relied totally on PCR testing, which means it is likely to have a far more accurate idea of the spread of the virus.

There's evidence that states may also not be testing enough in highly populated areas where infections tend to be higher.

As of 30 November, 13% of Uttar Pradesh's cases were found in its capital, Lucknow, although fewer than 6% of total tests in the state have been carried out there.

Kanpur district has the second-highest number of cases in the state, but just under 3% of total tests have been conducted there.

District-level data in Bihar reveals a similar trend. One of the most populous areas, Patna, accounts for 18% of all reported cases yet has conducted only 3% of the total tests in the state.

Other parts of the state have carried out relatively high numbers of tests, but have fewer cases.

"If you do fewer tests in areas where cases are high and vice-versa [more tests where cases are low], you end up reporting less cases while meeting a specific high-testing target," says Dr Rijo John, a public health policy analyst in Kerala.

India's Covid-19 national guidelines say states should trace contacts of at lea But India's parliamentary committee on health and family welfare has said that "poor contact tracing and less testing could have been a factor for the exponential growth of Covid".

It's difficult to get reliable information from every state about contact tracing.

Uttar Pradesh was recently lauded by the WHO for "early and systemic tracking of high-risk contacts".

By contrast, data for Karnataka shows its numbers for primary and secondary contact tracing have fallen since September.st 80% of positive cases within 72 hours.

Telangana state has data for the proportion of tests carried out on the primary and secondary contacts of those who have contracted Covid-19.

This has come down a bit since September along with overall testing numbers.

In Kerala, the data shows 95% of all cases since 4 May have been traced back to the primary and secondary contacts of infected persons.

But none of these datasets reveals if 80% of contacts of someone who was positive were traced within the timeframe set out in the national guidelines.

And many states do not make this data public.