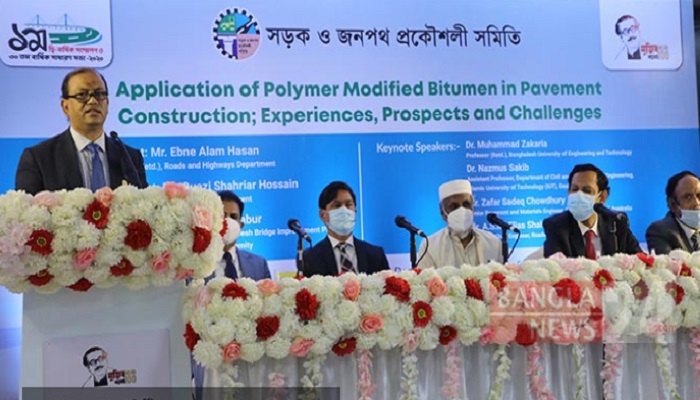 Speakers at a seminar on Thursday stressed the need for using polymer grade bitumen in the country‘s roads and highways considering the weather and temperature in Bangladesh for ensuring the durability of roads and highways.

They also said the time has come to adopt a more suitable strategy in using construction materials including Polymer modified bitumen (PMB) in road and highway projects.

The discussants came up with the views at a seminar titled “Application of Polymer Modified Bitumen in Pavement Construction; Experience, Prospect and Challenges” held at Sarak Bhaban in the city.

Sarak-o-Janapath Prokaushali Samity organized the seminar on the occasion of its first biennial conference, sponsored by Bashundhara Oil and Gas Company Ltd (BOGCL).

Speaking as the chief guest, Ebne Alam Hasan said it will be wise to take the decision in favour of using polymer bitumen as the capacity of roads and highways department has increased significantly.

The former chief engineer also said that expectation of people has increased manifolds, which is why the department should ensure the use of best equipment and technology in roads and highways projects.

He also stressed the need for preparing project specifications timely and cautiously so that the projects can be implemented properly.

Chief Engineer of Roads and Highways Department Quazi Shahriar Hossain said they used to use 80/100-grade bitumen in pavement construction and now they use 60/70 grade bitumen.

“Now we are moving forward to polymer modified bitumen owing to its quality and durability of construction,” he said.

Former BUET professor Dr Muhammad Zakaria said he has long been saying the government that the bitumen used in the roads was not sustainable for Bangladesh.

He suggested using polymer modified bitumen to ensure the durability of roads and highways in the face of rain or high temperature.