South Korea: The life-changing exam that won't stop for a pandemic 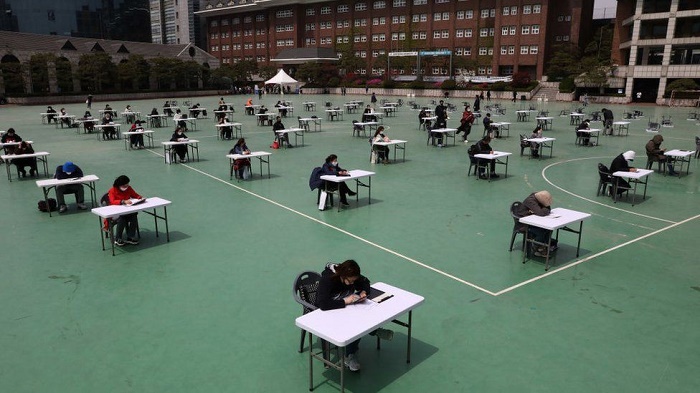 On Thursday, nearly 500,000 students in South Korea will sit for the country's marathon university admission examinations.

Already a stressful event, a third wave of the pandemic has left students with even bigger challenges.

The Suneung, an abbreviation for College Scholastic Ability Test (CSAT) in Korean, is an eight-hour examination which has back-to-back papers in six sections - Korean, maths, English, history, social studies, and a second foreign language.

The exam is considered crucial as it determines not only which university students can go to, but also their career paths. Both students and parents feel that it will directly impact their futures.

So when it begins, the entire country collectively holds its breath.

Planes are grounded so that the noise will not disturb candidates during listening exams, offices start later so that parents can get their children to the examination on time, military training ceases and even stock markets open late.

Parents begin preparing children for it from very young ages - usually around four - although there is also a significant percentage of children who start at two.

And if that was not enough pressure, this year students will have to overcome a massive additional challenge - the pandemic.

South Korea has done relatively well - it has registered 35,000 infections and just over 500 deaths - but a recent uptick has caused alarm. The country is now recording more than 500 cases a day and has set in place a number of restrictions intended to curb its spread.

What restrictions are in place?

The government has announced several measures designed to protect candidates, but these are being viewed as more of a hindrance than help.

As part of the new measures, students will need to wear masks and sit at desks with plastic dividers. There will be no water purifiers at the examination halls and they will have to bring their own water and a packed lunch. They will also not be allowed to gather and talk during breaks.

They will also be subjected to a temperature test, with those displaying symptoms of fever or cough told to take the exam in separate rooms.

What are students saying?

Largely, they are worried that the new restrictions will impact their ability to perform well, with a few worried about the impact on their health.

Some are afraid that the masks will impede their concentration, with one candidate telling BBC Korean that she was afraid she would feel "suffocated" with it on.

"I am worried that the mask will feel more uncomfortable during the test because I heard that the temperature of the heating is going to be set higher on the day," Oh Yeon-ju, 18, said.

The desk partitions have also been criticised as being difficult to work with.

"We took a mock exam with plastic partitions the other day. It was more distracting than I'd expected. With the partitions, I got limited desk space. It was more pressing as I was physically confined in between these partitions. My friends also felt the same way. Some of the partitions even fell apart during the exam," said Lee Sang-won, 18.

Ms Oh agrees. "I'm worried that that there won't be enough space to flip the long test sheets back and forth quickly," she said.

A few are angry that they are being asked to put themselves at risk. Over the past few days, the BBC has received comments from some students complaining about the situation.

One said students were "scared and angry", another that the health of hundreds of thousands of students was under threat.

However, correspondents say that most students, while unhappy with the situation, largely want to get the exam over with.

Why is the exam going ahead?

President Moon Jae-in has apologised to students for having to take the exam during a pandemic.

But the country successfully dealt with a mass event when it held elections in April. Officials seem reasonably confident that they can do it again.

Also, in simple terms, the exam is just too life-changing and important to push back further, given that it has already been postponed by a month.

President Moon met officials this week and asked them to ensure everything went smoothly.

"The entire world is watching our CSAT," he was quoted as saying by the Yonhap news agency, noting that many other countries had either cancelled or postponed national exams due to the virus.

He added that if the country could safely conduct the exam, the "excellence" of its pandemic preventive measures would "shine through".

However, some experts warn that holding the exams still brings risks.

Prof Kim Woo-joo, of the division of infectious diseases at Korea University's Guro hospital, told BBC Korean: "We say 490,000 candidates but there are also 23,000 test supervisors and tens of thousands of parents who will be going to churches or temple to pray for their children.

"Students will be taking off their masks during lunch and the test lasts for eight hours, so no matter how much we prepare, there is risk of indoor infection."

Reporting by Hyojung Kim and Woongbee Lee of BBC Korean