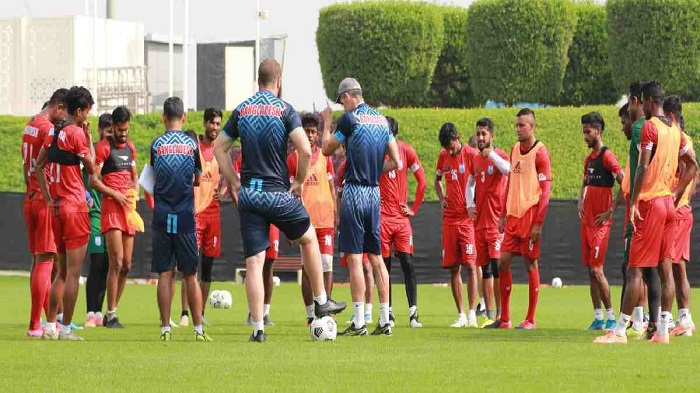 The Joint Qualification Group E match of the FIFA World Cup 2022 and Asian Cup 2023 between Asian champions Qatar and touring Bangladesh will be held on Friday in Doha.

The match will kick-off at 7pm Qatar time and 10pm Bangladesh time at the Abdullah Bin Khalifa Stadium in Qatar.

Only 20 percent spectators of the total capacity can enjoy the match at the stadium following health guidelines. The match ticket, costing 20 Riyal each went to sale from Wednesday.

Sports channel T-Sports and Bangla TV will telecast the match live for the Bangladeshi fans.

Bangladesh team reached Qatar on November 19, two weeks ahead of the match for the Covid-19 and as well as to adjust with the local conditions. They started their gym and practice session on Nov 22 after a three-day quarantine in Doha.

Bangladesh team suffered a 2-3 goals defeat against Qatar Army team in the first practice match on November 25 and conceded 0-1 goal defeat against Qatar Division-2 team Lusail Sporting Club on Nov 28 in the other match at the Pitch-1 & 2 of the Aziziyah Boutique (Super Club) in Doha.

Meanwhile, the British Head Coach of Bangladesh national football team Jamie Day, who failed to accompany the Qatar-bound Bangladesh National Football team on November 19 due to Covid-19, finally reached Doha on Nov 2 to inspire the national  team after recovering from Coronavirus after the 5th test.

The BFF is trying to minimise the mandatory quarantine period for him so that he can stay with the team in Friday's tough match.

Bangladesh players gave samples for Covid-19 sample on Wednesday for the Friday's match.

Under the proper guidence of Jamie Day, Bangladesh football team smartly returned to the international football after about ten months (during Covid-19) with a creditable 2-0 goals victory over upper ranked Nepal in the first match of the two-match Mujib Borsho FIFA International Series in Dhaka on November 13.

But his absence in the second match due to Covid-19, Bangladesh played to a goalless draw against Nepal on November 17 and clinched the two-match series 1-0.

With the feat, the FIFA world ranking of Bangladesh team moved three steps ahead in the latest ranking to place 184th  from 187th.