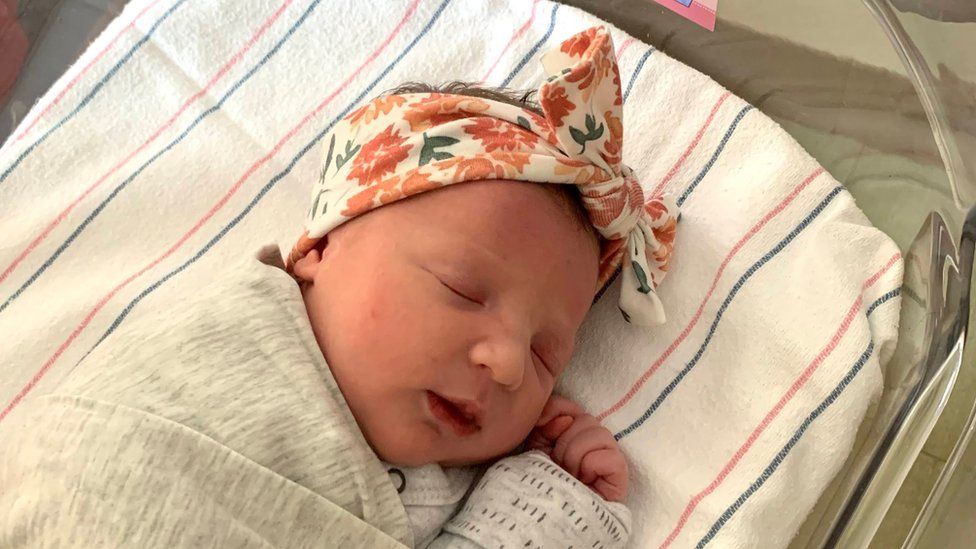 When Molly Gibson was born in October of this year, it was 27 years in the making.

Her embryo was frozen in October 1992, and stayed that way until February 2020, when Tina and Ben Gibson of Tennessee adopted it.

Molly is believed to have set a new record for the longest-frozen embryo to have resulted in a birth, breaking a record set by her older sister, Emma.

The family struggled with infertility for nearly five years before Ms Gibson's parents saw a story about embryo adoption on a local news station.

"That's the only reason that we share our story. If my parents hadn't seen this on the news then we wouldn't be here," Ms Gibson, 29, said. "I feel like it should come full-circle."

Ms Gibson, an elementary school teacher and her husband, a 36-year-old cyber security analyst, connected with the National Embryo Donation Center (NEDC), a Christian non-profit in Knoxville that stores frozen embryos that in vitro fertilisation patients decided not to use and chose to donate instead.

Families like the Gibsons can then adopt one of the unused embryos and give birth to a child that is not genetically related to them. There are an estimated one million frozen human embryos stored in the US right now, according to the NEDC.

Mark Mellinger, the NEDC's marketing and development director, said that experience with infertility is common among families who seek embryo donations.

"I'd say probably 95% have encountered some sort of infertility", he said. "We feel honoured and privileged to do this work", and help these couples grow their families.

Founded 17 years ago, the NEDC has facilitated more than 1,000 embryo adoptions and births, and now conducts around 200 transfers each year. Similar to a traditional adoption process, couples can decide if they would like a "closed" embryo adoption or an "open" one - allowing for some form of contact with the donor family.

This contact ranges between a couple of emails each year to a cousin-like relationship, Mr Mellinger said.

Couples are presented with 200-300 donor profiles, complete with the donor family's demographic history. The Gibsons had wanted a child for so long, the options were overwhelming.

"We did not care what this baby looked like, where it came from," Ms Gibson said. She sought advice from the NEDC where an employee told her to pick something "silly" and go from there.

The Gibson's children, Molly and Emma, are genetic siblings. Both embryos were donated and frozen together in 1992, when Tina Gibson was around a year old. According to the NEDC, Emma's 24-year-old embryo was the oldest in history to have been born, until Molly came along this year.

Emma loves her new little sister, Ms Gibson said. "She introduces her to anyone that sees her as 'my little sister Molly.'" And Ms Gibson has loved seeing the similarities between her girls, including a tiny wrinkle between their eyebrows when they're mad or upset.

According to the NEDC, the shelf-life for frozen embryos is infinite. The time-frame is limited, however, by the age of the technology - the first baby born from an embryo frozen after IVF was born in Australia in 1984.

"It's entirely possible that there will someday be a 30-year-old embryo that comes to birth," Mr Mellinger said.