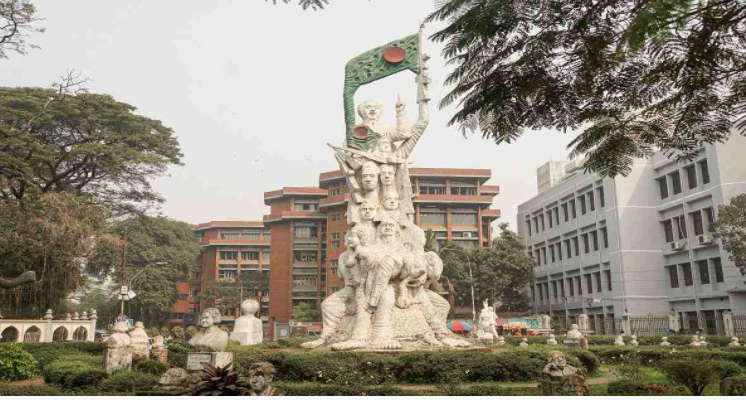 Who doesn’t get astonished watching at the sculptures? It is said that sculpture is the art of intelligence. Sculptures are wonderful symbolism of honor and representation. Dhaka city is glorified with several mind-blowing sculptures that symbolize different events of our history which we want to preserve. In this article, we are going to highlight the top sculptures in Dhaka city. Stay with us to know the specific symbolic events behind these mesmerizing sculptures. 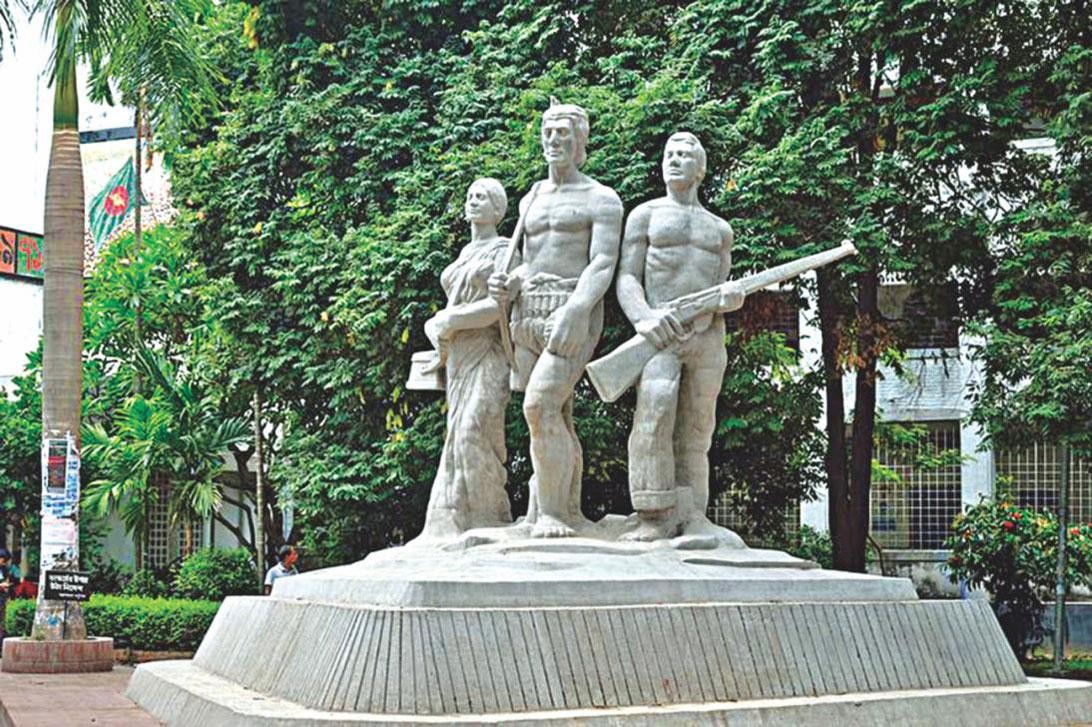 The three dynamic figures of Aparajeyo Bangla depict three people from different aspects of society. The left side statue symbolizes a young woman devoted to nursing holding the first-aid box. The middle statue represents a brawny village youth carrying a rifle on his right shoulder and a grenade on the left palm. The right statue portrays an urban youth bearing a rifle with his hands. These three fascinating statues of Aparajeyo Bangla represent the combined strength of the entire Bengali nation during the liberation war of Bangladesh. 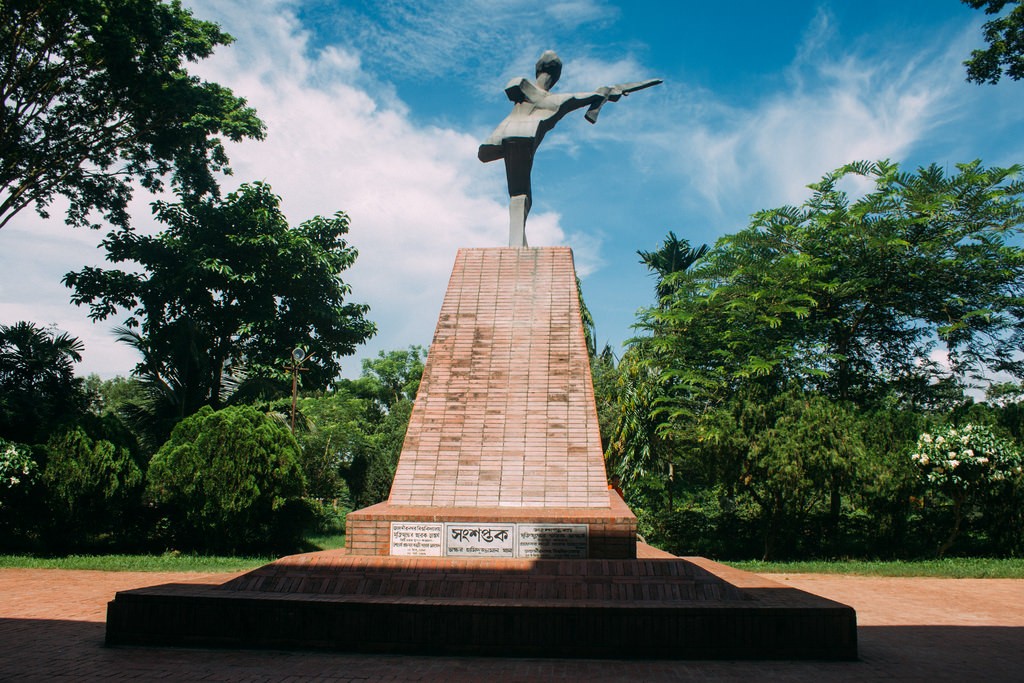 Shongshoptok
Shongshoptok is one of the popular sculptures in Bangladesh symbolizing an outstanding combination of sacrifice and determination of the freedom fighters during the independence war of Bangladesh in 1971. Designed by the renowned Bangladeshi sculptor Hamiduzzaman Khan, this sculpture was inaugurated in March 1990. Shongshoptok stands in front of the Central Library of Jahangirnagar University at Savar in Dhaka.

Shongshoptok sculpture symbolizes the bravery and devotion of an injured Bangladeshi freedom fighter. Even after losing one hand and one leg, the symbolic freedom fighter is holding a rifle and showing valor to fight against the Pakistani military forces until the last breath. This 15-foot high statue is made of steel armature and brass. Including the brick-built base, the whole Shongshoptok sculpture stands about 28 feet tall. 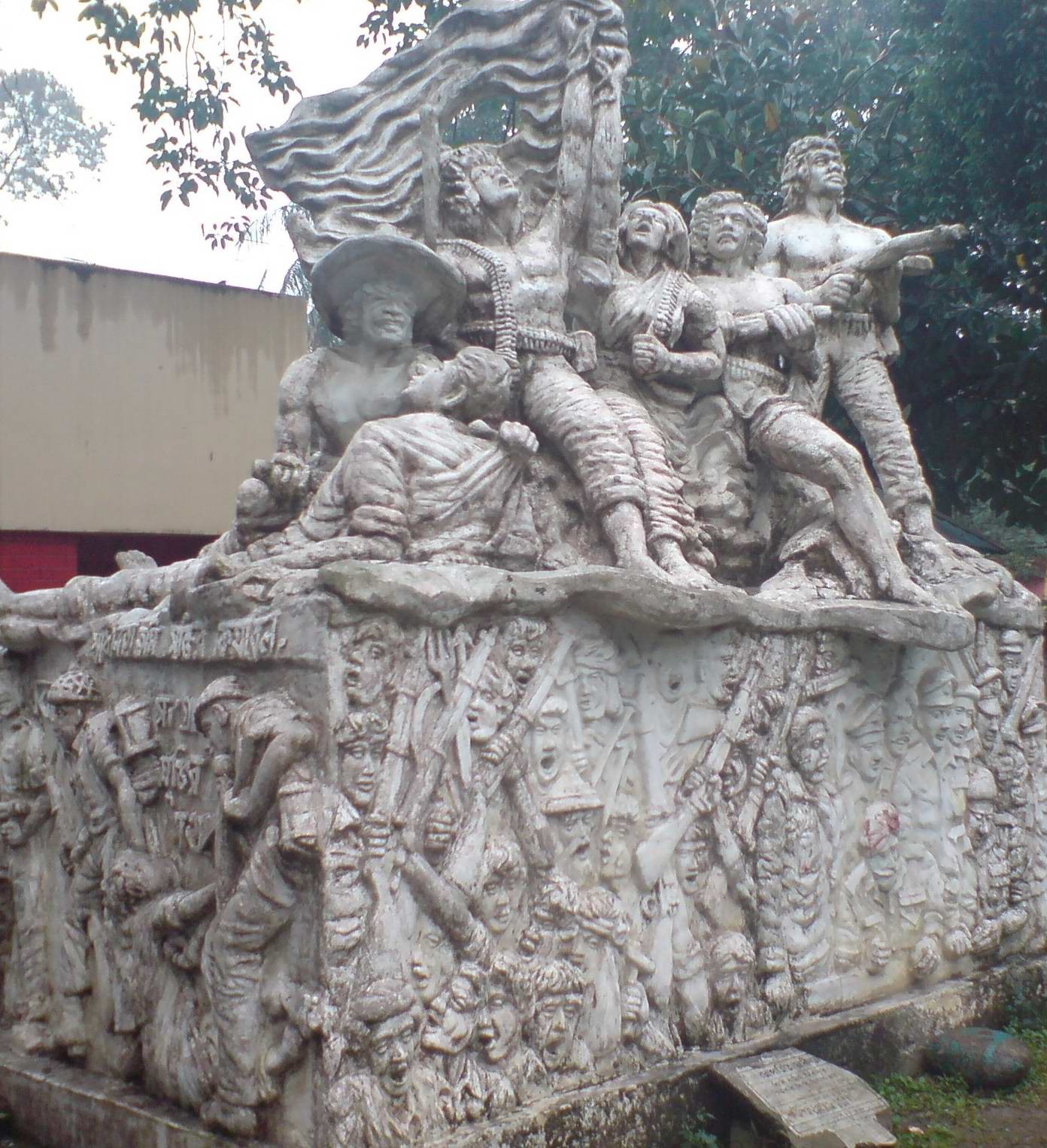 Shoparjito Shadhinota
Shoparjito Shadhinota is built in the context of the liberation war of Bangladesh in 1971. This sculpture symbolizes the horrendous genocide of general people, intellectuals, and freedom fighters. Besides depicting violence from diverse angles, this sculpture wonderfully portrays the united protest of the people of this country against the oppression of East Pakistani rulers.

Shoparjito Shadhinota is one of the best creations of the famous Bangladeshi sculptor Shamim Sikder. This sculpture is placed in Dhaka University at the intersection of TSC and Rokeya Hall. After the inauguration of this sculpture in 1990, the Islamic extremist groups threatened to demolish it. 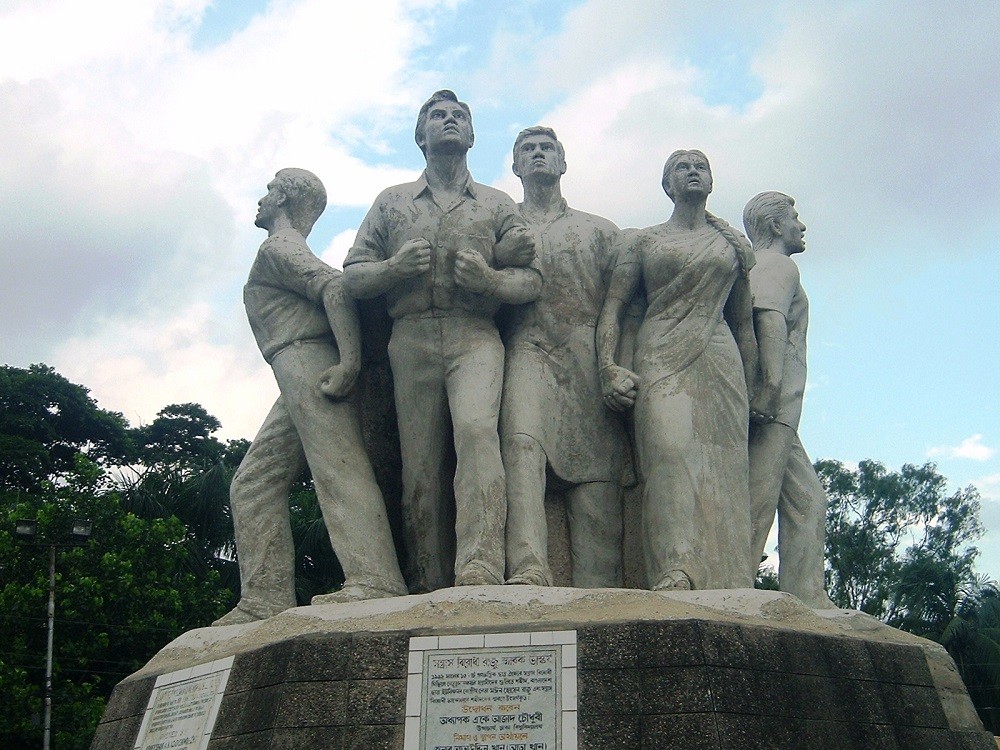 Raju Memorial sculpture
Installed at the TSC intersection of Dhaka University, Raju Memorial is known as one of the best Sculptures in Bangladesh. The concrete sculpture was established in 1997 following the design of Bangladeshi sculptor Shaymol Chowdhury and Gopal Paul. This anti-terrorism sculpture is built with several statues depicting a group of marching students keeping their arms linked with one another.

Raju Memorial sculpture is dedicated to the memory of Moin Hossain Raju, a meritorious student of the Soil Science Department of Dhaka University and an activist of the Bangladesh Students Union. On the 13th March 1992, suddenly gunfire violence broke out and panic spread in the Dhaka University regarding the clash among some political activists over establishing influence on the campus area. At that moment, Raju fearlessly marched on the street and protested against campus violence. During this protest, Raju was shot dead. ‘Raju Memorial sculpture’ symbolizes the language of protest. 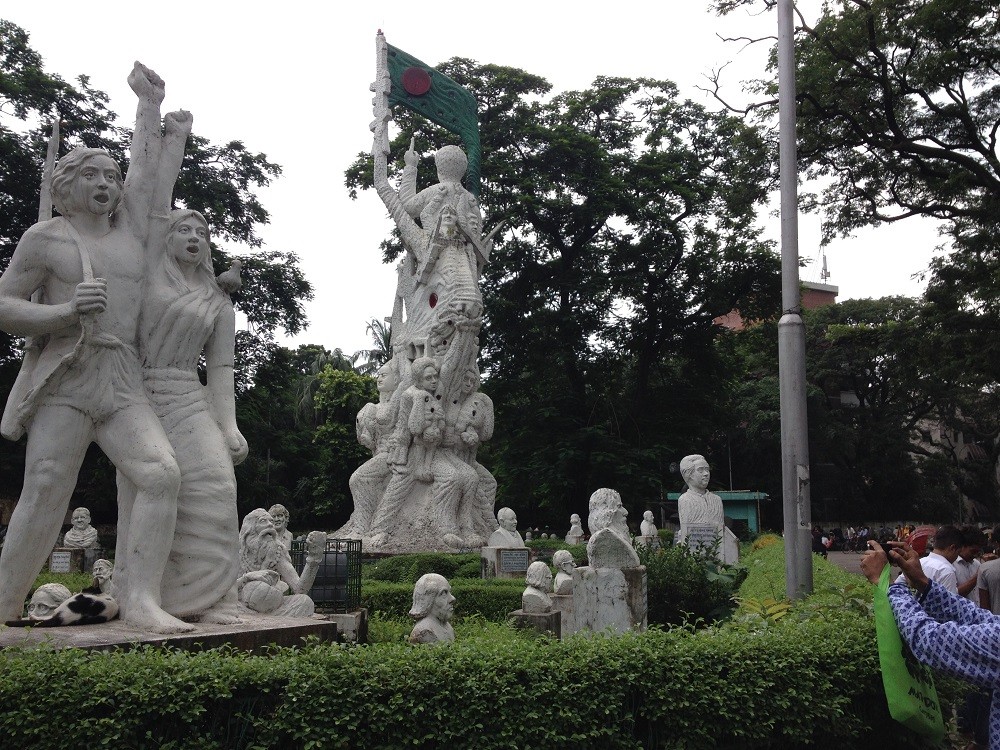 The main sculpture symbolizes the faces of some prominent historical persons and holds the National flag of Bangladesh on the top. The sculpture garden is enriched with one hundred and three miniature statues spread around the altar of the main statue. The small sculptures mostly represent the faces of pioneering leaders, poets, and renowned persons of Bengali culture and history. 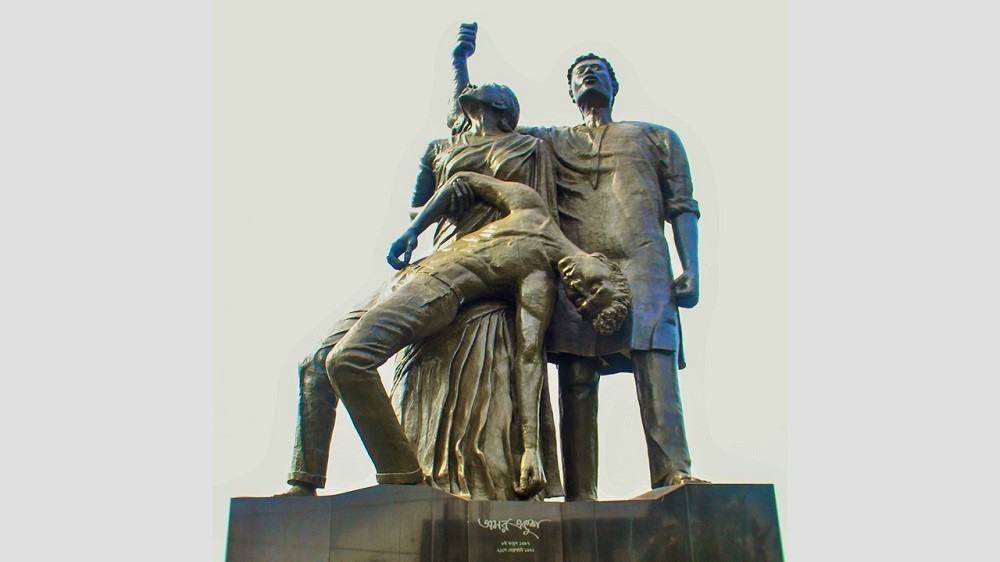 Amar Ekush
The Amar Ekush sculpture is situated near the central cafeteria of Jahangirnagar University at Savar near Dhaka. Designed by prominent sculptor Jahanara Parvinin, ‘Amar Ekush’ sculpture was first inaugurated in 1991. The sculpture remained unfinished for many years and the repairing work was finally done in 2018. This sculpture is built in the memory of our glorious language movement in 1952.

Amar Ekush tells the story of the painful sacrifice of the Bengali youths in the language movement. This sculpture has three figures including a protesting male student, and a mother holding his deceased son – killed by the west Pakistani aristocrats during the protest. Besides representing the indomitable courage of Bengalis to preserve the honor of their mother tongue, this sculpture exhibits the violence against language martyrs including Salam, Barkat, Rafiq, Jabbar, Safiur, etc.