Mobile court drives beefed up to ensure use of face mask 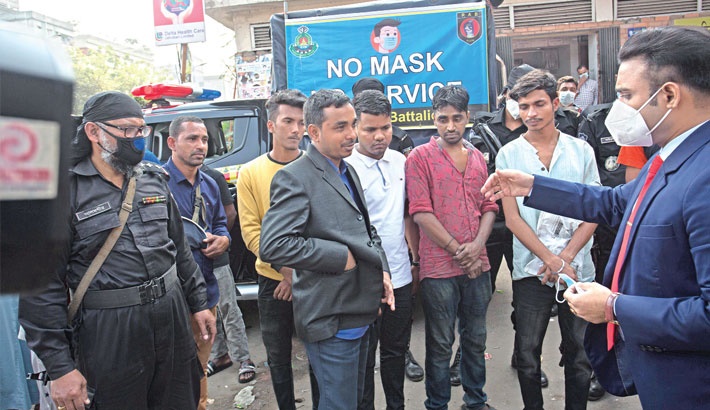 Mobile court drives have been strengthened across the country, including the capital, to ensure that people wear masks amid a fresh surge in both infections and deaths from coronavirus with a fall in mercury.

They were also slapping fine on those who were found not wearing masks outdoors.

As per government’s earlier instructions, magistrates and law enforcers under mobile courts are now relentlessly working in the capital and elsewhere across the country to ensure mandatory use of face masks apart from increasing awareness among people.

However, many continued to ignore the instructions to wear masks and maintain health guidelines when venturing outdoors.

The field administration was directed to take appropriate measures for enforcing the rules and conducting massive awareness campaign to make sure that people follow the health guidelines properly.

As part of the government’s directives, mobile courts conducted drives in different parts of the country, including the capital, on Wednesday when a number of people were fined for breaching the rules.

In the capital, a mobile court of Rapid Action Battalion (Rab), led by its Executive Magistrate Palash Kumar Basu, conducted separate drives in and around Jatrabari and slapped fine on a good number of people, mostly pedestrians, for not wearing face masks.

Talking to reporters during the drives, Palash said they were picking those who were not wearing masks. “They’re being released after realisation of a fine ranging from Tk 300 to Tk 400 each.”

He, however, said they were not handing out jail terms to anyone as their aim is to raise awareness among people.

It also distributed masks among people. In Tangail, a mobile court fined 31 pedestrians for not using masks at different parts of Bhuapur upazila.

On November 16, the government asked the administration to strengthen the mobile court operation and enforce laws to ensure the use of masks to check the raging Covid-19 pandemic.

In its desperate attempt to stem the second wave of coronavirus, the government has recently decided to go for more tough measures, including giving jail term against the mask-rule violators, across the country.

It instructed the authorities concerned to take harsher measures to ensure so that people wear masks to chase away the virus.

On November 19 last, Prime Minister Sheikh Hasina renewed her warning that the second wave of Covid-19 pandemic in the country is imminent and urged all to use masks. "I request you all to wear masks and follow other safety rules," she said.

In the last week of October, the government adopted a ‘no mask, no service’ policy to crush the virus.

It directed all government and private organisations not to provide services to those who do not wear masks.

Besides, the government on November 8 directed people of all faiths to wear masks while visiting places of worship, including mosques, temples and churches, across the country.