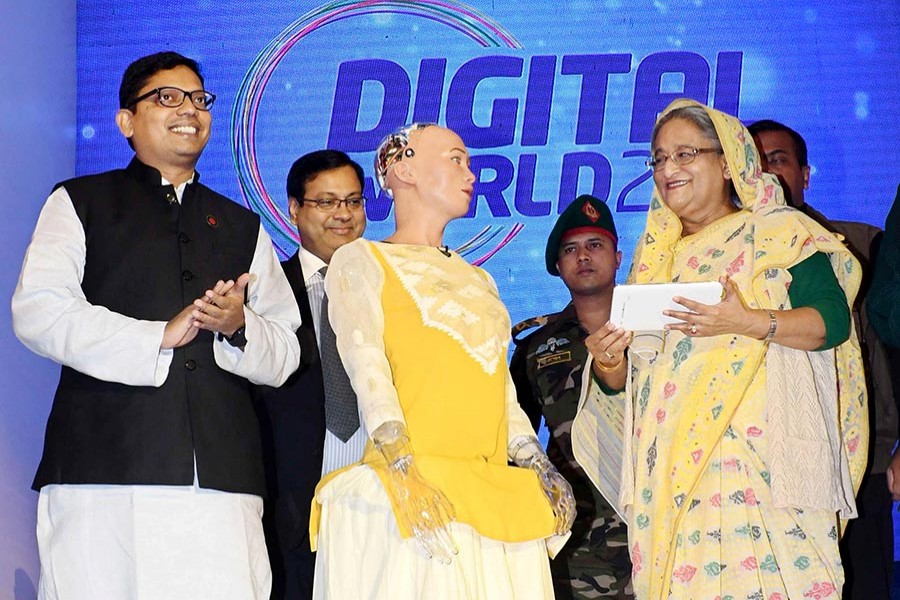 As per its electoral pledge, the Awami League-led government has been working relentlessly to make information and communications technology (ICT) as a ‘lifeline’ for the national economy.

The ruling party has taken various initiatives to fulfil its pledges in the 2018 national election manifesto.

A move is underway to build a youth-friendly ‘Digital Bangladesh’ through flourishing the utmost use of the ongoing revolution in ICT.

Digitising financial transactions and education, building infrastructure, promoting freelancing and expediting exports income, and entering the 5-G club are also underway to turn Bangladesh into a developed country by 2041.

Bringing rural areas under broadband connectivity has been going on to boost rural economy, diversification of jobs and extending e-services alongside setting up digital centres, hi-tech parks and incubation centres in districts, and skilled manpower eyeing the 4th industrial revolution.

Science and technology secretary Abdus Sabur told the Daily Sun that facing 4th industrial revolution, the government has taken a series of midterm plans to flourish ICT through spreading various components of this sector across the country.

“Making a Digital Bangladesh is now a reality. The process began in January 2009. I think it’s a glaring example of establishing connectivity across the country,” he said, adding that this is not end, a move is underway to implement expansion of ICT exports, ensuring of required large public investments in ICT infrastructure, ICT-related research and development, and skills development.

Experts said the country’s progress and development activities have not yet come to a halt despite the coronavirus pandemic as the government has been successfully expanding ICT facilities at the grass-roots level.

Apart from fulfilling its pledges, the government has extended its support during the COVID-19 outbreak. To face the pandemic, the ICT division has taken many initiatives, including introduction of 333 helpline and ‘doctors pool bd’ application, which facilitates telemedicine services, expediting relief activities.

Besides this, the ICT division has taken steps to run virtual courts in 87 courts by bringing 9,000 lawyers alongside introducing online classes for schools, colleges and universities.

The government is emphasising on four goals to build an ICT-based economy by ensuring connectivity, developing human resources and e-governance and strengthening the domestic IT industry.

To this effect, the government has expanded internet connections through fiber optic in 3800 unions, set up hi-tech parks, IT training centres and software technology parks at divisional and district levels alongside establishing digital literacy centres and digital content industries.

The government has already set up some 6,500 digital centres in rural areas, which has created 13,000 entrepreneurs, including 5000 women, facilitating 6 million people per month.

To ensure uninterrupted internet facilities, the government has a plan to build solar-powered base stations in remote areas. 4G coverage and service will be expanded to the union level in addition to taking steps to start the activities of setting up of 5G network.

To create skilled human resources, the government has already trained at least 55,000 youths, including 5,000 females. ICT division has started operation of a job portal for physically-challenged persons and trained some 2,500 people.

In this regard, the ICT division has recently started to endorse freelancers in Bangladesh by giving electronic/virtual identity card to prove income and ensure social status. Besides, the government is planning to provide bank loan for freelancers and introducing ‘paypal’ services.

Right now, Bangladesh has some 600,000 freelancers while the government has a target to increase the number of freelancer to one-million.

“Giving recognition to the world’s second largest country in terms of freelancers is a massive improvement in expediting export earnings,” he said, adding that the coronavirus pandemic cannot stop livelihood as the country has achieved a huge infrastructure development during the incumbent government which keeps business, banking, government and private activities on.

Apart from these initiatives, the government is working to ensure cyber- security, preservation of data and content filtering and reduce cyber-crimes and bullying.

The country has already opened the National Data Centre, which appears as the world’s seventh largest ICT facility, to elevate status one step ahead towards Digital Bangladesh.