The pioneer in Bangladesh for introducing comprehensive learning management system 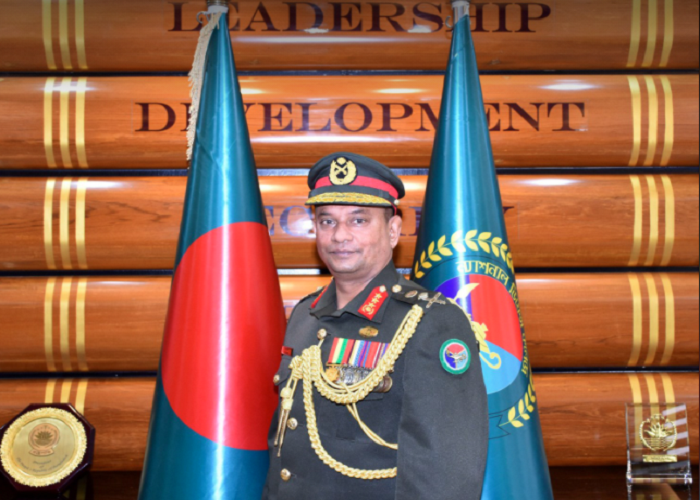 Before joining as the Commandant Lieutenant General Ataul Hakim Sarwar Hasan was the Vice Chancellor of Bangladesh University of Professionals.

He is the pioneer in Bangladesh for introducing comprehensive learning management system including remote proctoring and plagiarism checker of world’s highest standard for public University.

He is a graduate of Defence Services Command and Staff College of Bangladesh and Brazil Staff College as well. He completed Portuguese Language Course from Language Institute of Rio-de-Janeiro, Brazil.  He has completed Armed Forces War Course in 2004 and National Defence Course in 2013.

The General has a long and illustrious command experience at various echelons in the Army which includes Commanding Officer of an infantry battalion, Commander of two infantry brigades.

He was founding GOC of 10 Infantry Division in Ramu, Cox`s Bazar. As GOC he also commanded Logistics Area, Dhaka Cantonment and 55 Infantry Division, Jashore Area. He is the longest serving formation Commander of Bangladesh Army.

The General served as staff officer at Army Headquarters. He worked as ‘Strategic Planner’ in the Combined Planning Group (CPG) of United States Central Command Headquarter (USCENTCOM), Tampa, USA. He has the experience of serving as Colonel Staff of an Infantry Division.

He served as the Director of Counter Terrorism and Intelligence Bureau of Defence Services Forces Intelligence. He has also the experience of serving as Director General Operations and Plan at Armed Forces Division.

The General has in his credit the experience of serving as Instructor at the Tactics Wing of School of Infantry and Tactics. He was also a Directing Staff at the Defence Services Command and Staff College.

He served as Commandant of Bangladesh Infantry Regimental Center, entrusted to train and groom the soldiers and officers of Infantry, ‘teeth’ arms of Bangladesh Army.

Wearing blue beret, he served as Senior Operations Officer in the United Nations Guards Contingent in Iraq. He participated in “Counter Terrorism Cooperation and International Conference” in United Kingdom and Australia in 2011; ICRC Seminar in Bhutan in 2012; and Regional Conference on Chemical Weapon Convention in Nepal in 2012.

The General also participated in the Exercise Eagle Determination/Resolve 2015 in Kuwait. He attended The Land Forces Pacific (LANPAC) Symposium in Hawaii, USA in 2017.

His hobbies include horse riding, travelling, reading books and listening to music. He is happily married to Mrs. Farzana Hasan, a lecturer of Shahid Anwar School and College, and proud father of two sons Raiven and Rynel.