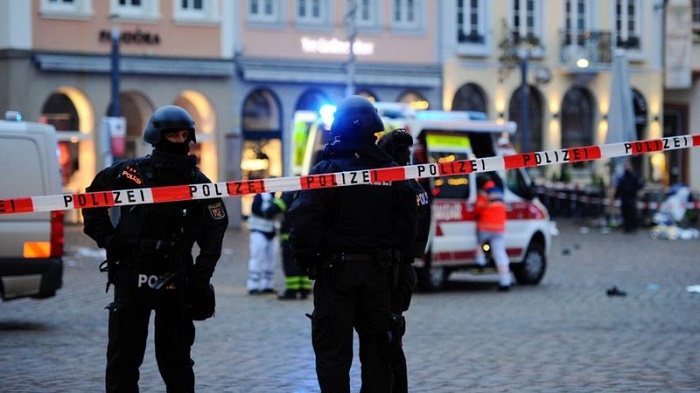 A car has ploughed through a pedestrian area in the western German city of Trier, killing five people including a nine-week-old baby girl, police say.

The driver, a 51-year-old local man, has been arrested. The prosecutor said the suspect had drunk a significant amount of alcohol.

Authorities said they were not working on the assumption that the incident was politically or religiously motivated.

The city's mayor described the scene as "horrible".

Witnesses said people screamed in panic and some were thrown in the air by an SUV travelling at high speed in Trier's Brotstrasse and Simeonstrasse streets towards the city's famous Roman gate, the Porta Nigra.

The incident happened at around 13:45 local time (12:45 GMT), and the suspect drove for 1km (0.62 miles) "hitting people at random on his way" before being stopped by a police car, Trier police spokesman Karl-Peter Jochem said earlier.

The victims were three women, aged 25, 52 and 73. Police said the 45-year-old father of the baby was also killed. His wife and one-year-old son were injured and admitted to hospital.