Owners save puppy from being strangled by python, later frees python in the wild too 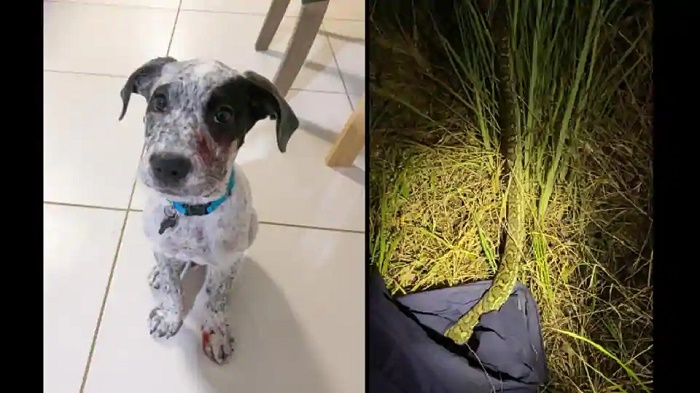 Some rescue stories deserve special mention because of the presence of mind of the people involved. The rescue story of Wally, a 10-week-old puppy, totally fits that definition. The dog’s owners’ quick actions helped saving Wally’s life from a Carpet python trying to strangle it. Not just saving the little dog, the owners later released the snake into the wild too, unharmed.

The story shared on the Facebook page, Sunshine Coast Snake Catchers gives a detailed description of the rescue. “This is like something out of a horror movie! Wally the puppy dog was grabbed by a large Carpet Python late last night at a home in Caloundra West,” reads a part of the caption. It goes on to describe how the owners heard Wally’s howling and rushed to its help.

“They were able to grab the Carpet Python and slowly uncoil it from the tail end all the way to the head! The lady also got bitten by the snake in the process! Luckily in the end the dog, the owner and the snake were fine,” the description adds.

The owner Kelly Morris was terrified throughout the incident but managed to untangle Wally from the python. She and her partner Ryan, later put the python in a pillowcase to release it far in the wild, reports DailyMail.

Shared on November 25, the post has garnered over 3,300 reaction along with many shocked comments from netizens. While some were horrified at the incident, others wished for Wally’s speedy recovery.

“Poor little man! But so good the owners didn’t jump straight to killing or trying to kill the snake! Good on them,” wrote a Facebook user. “Huge amounts of respect for the owners, who were level-headed enough to make the right decision for all involved, instead of having a purely emotional response,” pointed another.

“How traumatic for both the puppy and the family, so glad the outcome was good, what a cute little puppy,” commented a third.