Kohli falls to nemesis, Pandya hits India to 302-5 in ODI 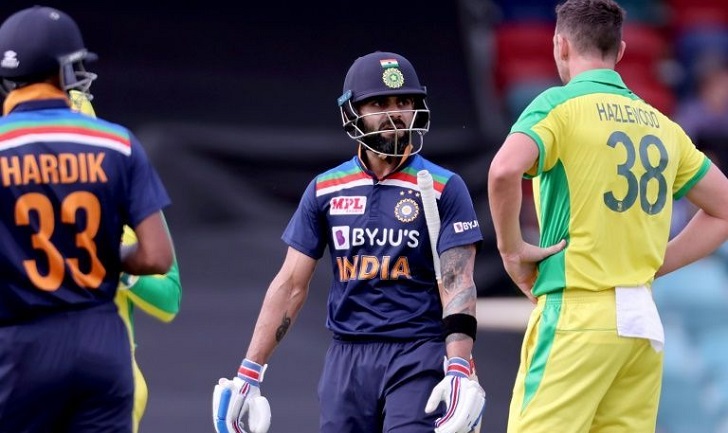 Josh Hazlewood once again proved Virat Kohli's nemesis as Hardik Pandya and Ravindra Jadeja blazed half-centuries for India to reach 302 for five in the final one-day international against Australia in Canberra on Wednesday.

Hazlewood again got the measure of the India master batsman, dismissing him for 63 to put the tourists under mid-innings pressure in the dead rubber after Australia won the opening two games.

Kohli's exit threw down the gauntlet to Pandya, who finished top-scorer with 92 off 76 balls with some late fireworks with Ravindra Jadeja 66 (50) in a pulsating 150-run stand.

Pandya and Jadeja seized the momentum for India in the final overs after Australia had kept the tourists in check, adding 76 runs in the last five overs.

Kohli was out when a review instigated by wicketkeeper Alex Carey picked up a faint spike on 'Ultra-Edge' off Hazlewood which reversed the on-field decision.

It was Hazlewood's third dismissal of Kohli in the three-match series and a massive breakthrough for the Australians who had reduced India to 152-5 in the 32nd over.

Along the way Kohli became the fastest to reach 12,000 runs in just 242 ODI innnings to be in sixth place among the all-time 50-overs scorers.

The last seven games in Canberra have all been won by the side batting first, six of them while defending 320-plus totals.

Rising all-rounder Cameron Green came in for his Australian debut for the injured David Warner, while Ashton Agar and Sean Abbott replaced the rested Pat Cummins and injured Mitchell Starc.

Abbott, playing in his first ODI since 2014, got a wicket in his first over when Shikhar Dhawan was beaten by the change in pace and hit straight to Agar in the covers for 16 off 27 balls.

Shubman Gill looked in good nick before he played across the line and was leg before wicket attempting to sweep left-armer Agar for 33 off 39 balls.

Leg-spinner Adam Zampa bowled very tidily and got his reward when Shreyas Iyer hit straight to Marnus Labuschagne at backward point for 19.

Agar hit KL Rahul's back leg as he attempted to sweep and not even the DRS could save him, out for five as India slumped to 123-4.