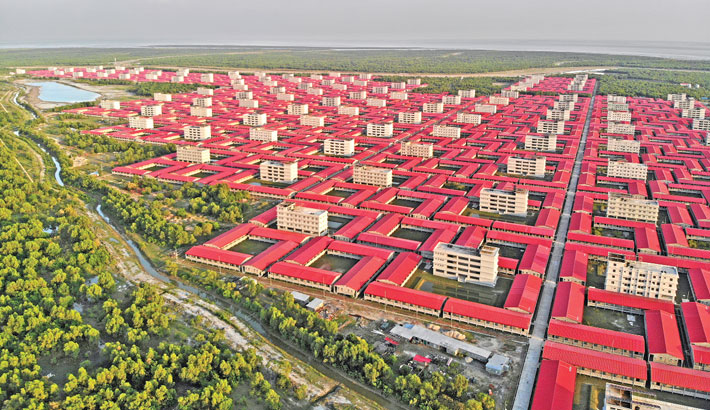 The government has developed residential facilities in Bhasan Char of Noakhali district for rehabilitation of distressed people under Ashrayan-3 project. Bangladesh Navy in association with the civil administration is implementing the project. — sun photo

Bhasan Char, an island equipped with sources of livelihood and natural beauty in Noakhali, is ready to accommodate underprivileged people with all kinds of modern facilities.

The island, around 21 nautical miles away from Noakhali district headquarters, has communications facilities with engine boats for public while scheduled ships operate from Chattogram for commercial use.

The total landmass of Bhasan Char is 13,000 acres, including low-lying areas -- of which 6,427 acre is now usable. Of the usable land, 432 acre was developed for the residential infrastructure, 1,702 acres for embankment construction and 918 acres for foresting.

Bangladesh Navy has developed the mega infrastructure to make the island ready for habitat under the Ashrayan-3 project in line with the vision of Prime Minister Sheikh Hasina to rehabilitate the distressed people.

There is a capacity to accommodate around 100,000 distressed people in Bhasan Char. Initially, the project officials plan to relocate the displaced Rohingyas of Myanmar from Cox’s Bazar to Bhasan Char.

“In the direction of Prime Minister Sheikh Hasina, Bangladesh Navy has constructed the mega residential infrastructure to relocate displaced Rohingyas with the view of keeping the displaced community away from the countrymen through Eco-friendly Sustainable Development,” Ashrayan-3 Project Director Commodore Abdullah Al Mamun Chowdhury said in a statement.

Bhasan Char has already sheltered around 300 Rohingyas, who were rescued at the Bay of Bengal during their escape to Malaysia.

The entire project has been developed based on cluster house, shelter station. In architecture of the infrastructure, the houses have been constructed 4 metre height from the land.

There are a total of 1,440 houses surrounding 120 shelter stations. Around 100,000 people can be accommodated in the houses, according to officials.

“In the project, we’ve focused on steel for making the infrastructure sustainable for habitat people in any emergency. As per the vision of the government, the distressed people will be accommodated after the repatriation of Rohingyas to Myanmar,” said Commander Md Anwarul Kabir, deputy project director of the Ashrayan-3 project.

Every shelter station is capable of accommodating 1,000 people at a time while the livestock animals can be kept safe in the underground of the buildings.

Regarding the livelihood opportunities in the island, officials of the project mentioned that locals get success in farming of sheep, buffalos, pigeons and poultry.

“Besides this, there are huge opportunities to cultivate fruits and paddy as the salinity of the land has been reduced significantly in the last two years.

Of 120 shelters, there are 20 allocated shelters for civil administration, development agencies, learning centres, mosques, community clinics, super shops, daycare centres as well as orphanage.  There is constructed a market infrastructure which can be used for food distribution among locals. “As the displaced people from Myanmar are yet to get refugee status, they can be termed as ‘stateless people’.  Following the local regulation, they (Rohingya) can’t transact money. We think about developing a culture of exchanging products in a standard process,” Commander Kabir said.

There are developed 20-bed hospitals and four community clinics with modern equipment of medical treatment.

For the security of the island, there is developed 9 feet high embankment over 12 kilometre shore land. The embankment will be 19 feet within very short time for improving shore protection from any super cyclone.

“We’re improving the embankment. However, the general tide was not more than 2.5 feet. We experienced couple of cyclones like Fani and Bulbul. There is no damage luckily. It’s interesting that a group of international experts have shown that the island is safe from cyclone due to its geographical location,” Commander Kabir added.

There was 1 megawatt solar-powered stations while 1 megawatt generator and 3 diesel-powered generators with 500 kilowatt capacity for uninterrupted power distribution.

Recently, representatives from 22 non-government organisations have reached Bhasan Char with food items for Rohingyas. Foods will be provided for them for two months and then they will have to cook their own foods.