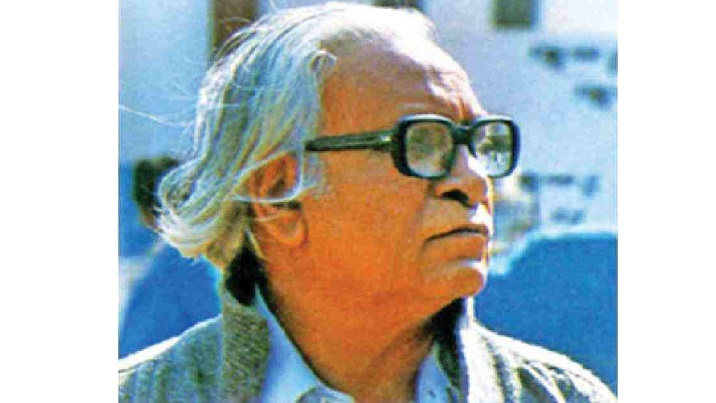 Today marks the 99th birth anniversary of legendary artist Quamrul Hassan, famously known as ‘Potua’ for his brilliance in folk arts and remembered for redesigning the national flag of Bangladesh.

Born on December 02, 1921, in Kolkata, Quamrul graduated in fine arts from the Government Institute of Arts (now College of Arts and Crafts, Kolkata) in 1947.

He came to Dhaka after the partition of India in 1947 and then helped ‘Shilpacharjo’ Zainul Abedin to establish Dacca Art College, now known as the Faculty of Fine Arts of Dhaka University. He served there as a teacher from 1948 till 1960.

Through his portrayal of traditional aspects that he represented on his canvases using elements from the folk genre, Quamrul Hassan had contributed immensely to the country’s art scene.

Talking about Quamrul Hassan, renowned art critic Moinuddin Khaled said that people still fail to grasp the artist as not many of his artworks got exhibited. “Picasso was his idol, so his paintings have had similarities with Picasso, and the most important aspect of his paintings was his use of the metaphor - through which he channelled his protest against autocratic rulers like Yahya Khan before the Liberation War of Bangladesh,” Khaled addressed the art maestro to UNB.

Quamrul Hassan actively participated in all major national movements including the non-cooperation movement in 1969 and the Liberation War in 1971. During the war, he first served as the chairman of the Resistance Committee in Hatirpul area in the capital and later served as the Director of the Art Division of the Information and Radio Department of the Bangladesh Government in exile from Kolkata.

His caricatures portraying the ferocious gesture of Pakistani military dictator Yahya Khan titled ‘Ei Janowarder Hottya Korte Hobe’ (Annihilate These Demons) is considered as a classic artwork and cartoon that inspired the freedom fighters during the War of Liberation.

Quamrul Hassan passed away through suffering a heart attack right after completing a sketch satirising the then autocratic ruler, President Hussain Muhammad Ershad, titled ‘Desh Aj Bissho-Beheyar Khoppre’ (Our land is now in the hand of the champion of shamelessness) at the 2nd National Poetry Festival in Dhaka University on February 02, 1988.

He received several prestigious awards and honours including President’s Gold Medal, Independence Award, Bangladesh Charu Shilpi Sangsad Honour and others for his magnificent contributions in the Bangladeshi art sphere.