Jamie flies to Qatar on Wednesday 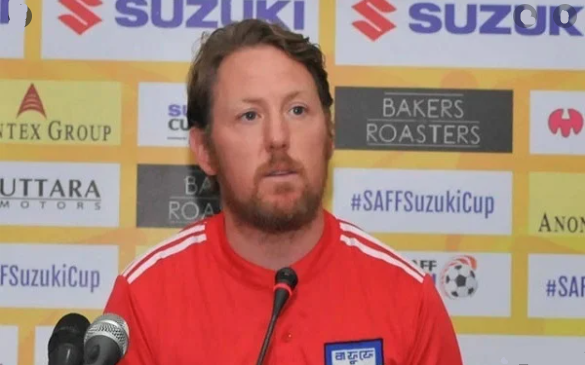 Bangladesh National Football Team Head Coach Jamie Day will leave Dhaka for Doha on Wednesday to join booters who are in Qatar to play their one-off away match of joint qualifiers round two of FIFA World Cup 2022 and AFC Asian Cup 2023 against Qatar at Abdullah bin Khalifa Stadium on December 4 at 10:00pm (BST).

Day though scheduled to fly and believed to be available at the dugout on the match-day, he is still suffering from stomach problems and mild virus infections in lungs.

“Flying tomorrow (Wednesday). Happy to be going to the match and be available. I still have stomach problems, but COVID symptoms are nearly gone. But I tested negative and now feel much better,” Jamie told the reporters on Tuesday.

“I am pleased that I’m over that now and got negative results. I can concentrate on the game and focus on going forward,” he further added.

About Jamie’s return, acting head coach Stuart Watkiss said, “Everybody is being given a massive lift with the news that Jamie Day is feeling much better. Everybody in the camp is very, very pleased with that news.”