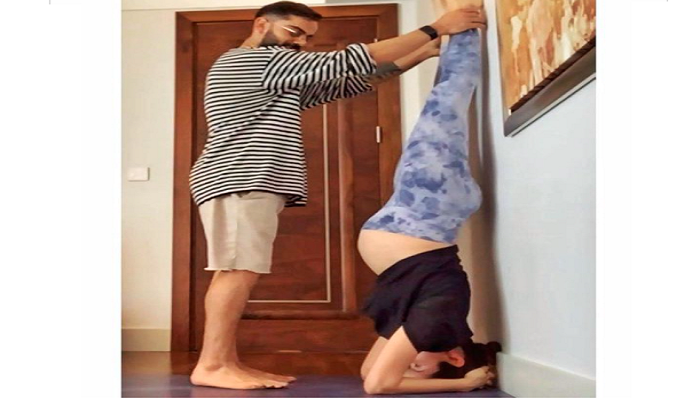 Anushka Sharma and Virat Kohhli set couple goals higher and higher with each new post. On Tuesday, mom-to-be Anushka Sharma shared a throwback photo, talking about the importance of yoga during pregnancy. In the photo, Virat can be seen helping out pregnant Anushka with her Shirshasana.

Talking about the throwback memory from what appears to be a few months into her pregnancy, Anushka wrote: "This exercise is 'hands-down' (and legs up) the most difficult one. Throwback. PS - As yoga is a big part of my life, my doctor recommended that I can do all such asanas that I was doing before I was pregnant, barring twists and extreme forward bends, but of course with the appropriate and required support."

Anushka added she practiced yoga under proper supervision and guidance, especially with help from Virat: "For the Shirshasana, which I have been doing for many years, I ensured that I used the wall for support and also my very able husband supporting me balance, to be extra safe. This was also done under the supervision of my yoga teacher Eefa Shrof who was virtually with me through this session. I'm so glad I could continue my practice through my pregnancy."

Virat Kohli is currently in Australia for the ongoing Australia-India cricket series. Virat will soon be returning to India and has been granted paternity leave by the BCCI as Anushka is due in January.

Virat and Anushka dropped the pregnancy news in August, with the cutest statement ever: "And then, we were three! Arriving Jan 2021." In terms of work, last seen in 2018 movie Zero, Anushka Sharma produced two web shows this year - Pataal Lok from Prime Videos and Bulbbul for Netflix.