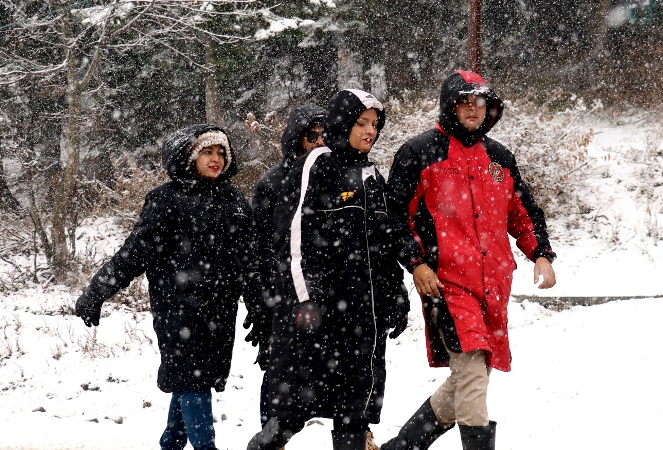 After witnessing a slump for more than seven months due to outbreak of Covid-19 in Indian union territory of Jammu and Kashmir, there is a ray of hope for the valley’s ailing tourism sector as the fresh snowfall in higher reaches is attracting tourists once again.

Gulmarg in Baramulla district, which recorded almost two feet of snowfall, has come to life as tourists have started thronging this popular ski-resort. On November 15, as many as 574 tourists arrived at the Srinagar International Airport from different cities, mostly Bengaluru, Kolkata, Chennai and Mumbai to spend their ongoing Diwali vacations here, officials said.

As per J&K Tourism department officials, November 15’s tourist arrivals are the “highest single-day visitor arrivals to the Valley registered during the last seven months”. Officials said that 2238 tourists have arrived in the Valley during the last two weeks and the travel queries are on a rise. Tour operators from outside the Valley, who are accompanying groups of tourists are optimistic for revival of tourism in the Valley.

Satish Shah, owner of Mumbai-based Pooja Tours and Travels, who is presently in the Valley accompanying a group of 70 tourists from Maharashtra said he will be facilitating the visit of another group of 35 tourists from Mumbai to Srinagar for an 8-day visit beginning November 20.

Shah said that all protocols related to Covid-19 such as “wearing of face-masks and sanitisation of hotels is being followed”.

“We have launched a campaign by the name of ‘Unlock Kashmir’ and keep encouraging people to visit the Valley. There is demand for domestic tourism as there are still restrictions on international tourism and travel,” Shah said.

Shah said the “worst downturn” in Kashmir’s tourism sector was witnessed after the February 2019 Pulwama attack and more recently after the outbreak of Covid-19, which even led to job losses in the hospitality sector. However, Shah said the fresh snowfall in upper reaches especially Gulmarg has “sent out a positive message to prospective tourists.”

President, Travel Agents Association of Kashmir, Farooq Kuthu, said there has been a spurt in travel queries from various states after the fresh snowfall in higher reaches of the Valley.

Kuthu said with another MeT prediction for snowfall next week, tourism players were hopeful that skiers will start thronging Gulmarg this winter.

“We are hopeful that an increase in visitor arrivals will also help to boost hotel occupancy rates which have been abysmally low. The tourism industry has been at the receiving end for a long time but we are upbeat about this winter season,” Kuthu said.

Secretary Tourism, Sarmad Hafeez, said that besides the arrival of winter, “robust promotional activities” were the reason for steady increase in tourist arrivals.

Hafeez said the “snow carnival” and other recreational events lined-up in Gulmarg, Pahalgam and Srinagar this winter will provide a boost to tourism in Kashmir. He said “special focus was on following Covid-19 guidelines and protocols”.

“For last few months, only 30 to 40 tourists used to arrive here daily but now we are receiving hundreds of tourists every day. Promotional activities held on World Tourism Day recently and road shows held by the Tourism department in Kolkata last month has helped to encourage tourists to spend Diwali vacations in the Valley,” Hafeez said.

He said Gulmarg Gondola cable car, which re-opened last month after six months of closure, continues to be a “prime attraction for tourists”.

Hafeez said an ethnic food festival and a cultural show is also being organised to woo more tourists.

“Tourism has to work in tandem with art and culture and promote the tradition of the Valley as well. The department will be soon organising roadshows in Chennai and Bengaluru to promote Kashmir tourism” Hafeez said.