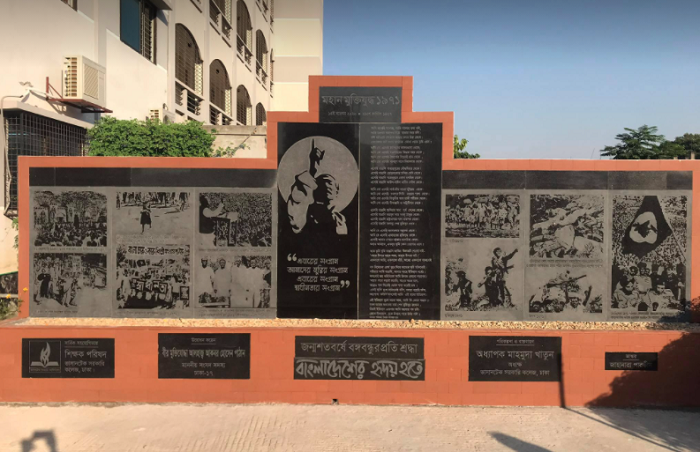 The undisputed supreme leader of the Bangladesh, Father of the Nation Bangabandhu Sheikh Mujibur Rahman has struggled his entire life to realise the demands of the people of Bengal.

An independent Bangladesh was born under his leadership.

From the language movement of 1952 to the victory of 1971, Bangabandhu played a leading role in every struggle to fulfill the hopes and aspirations of the people of Bengal.

The mural will help the next generation to know about the independence of the country and also will inspire them to be imbued with the spirit of Liberation War and ideals of Bangabandhu.

The mural titled 'Bangladesher Hridoy Hote' has been installed on the premises of Vashantek Government College in the capital in order to pay homage to the birth centenary of Father of the Nation Bangabandhu Sheikh Mujibur Rahman.

The 18-feet long memorial mural has been placed in front of the Shaheed Minar of the college.

The mural was inaugurated on November 14, 2020 by Famous actor Akbar Hossain Pathan Farooque, a Member of Parliament from Dhaka-17.

The architect of the mural is renowned sculptor Chowdhury Jahanara Parveen. The construction work of the mural was carried out under the planning, direction and supervision of  Prof Mahmuda Khatun, Principal of Vashantek Government College.