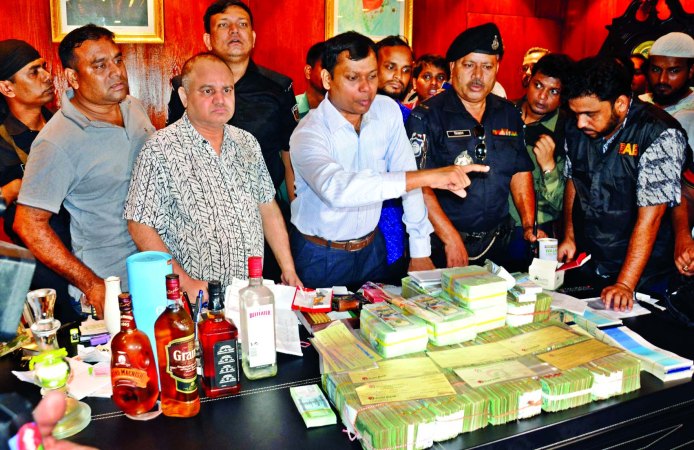 The Sheikh Hasina-led government has been implementing a policy of zero tolerance on corruption, crimes and irregularities in the country, as her party Awami League incorporated a pledge in its 2018 election manifesto for fighting such crimes from the society.

From the beginning of its formation for a third consecutive term, the government has adopted a tough stance on terrorism and drug abuse.

Under the firm leadership of Prime Minister Sheikh Hasina, the government has launched drives against corruption and irregularities.

Awami League will not take responsibilities for any crimes and irregularities and even will not show mercy to its leaders and activists whatever powerful they are, party spokespersons said categorically.

“Those who will be found involved in corruption and irregularities will be brought to book. It doesn’t matter which parties they belong,” she said.

Sources said drives against corruption and irregularities raised hope in 2019. Later, the drives were continued against the corrupt in health sector.

Even, the Anti-Corruption Commission (ACC) has imposed a travel ban on dozens of people, including some Awami League lawmakers.

The National Board of Revenue (NBR) has frozen bank accounts of former Jubo League chairman Omar Faruk Chowdhury, Swechchasebak League president Molla Mohammad Abu Kawsar and some other AL men and their relatives.

Even, AL general secretary Obaidul Quader said none from outside helps the government to identify all these irregularities.

“But, on its own initiative, the government has launched a harsher drive to stop irregularities,” he said.

Later, the nation witnessed drives against those of health sector who were involved in amassing money by faking COVID-19 test reports and supplying fake masks and substandard protective gear.

Over the much-hyped N-95 mask scam, the ACC has arrested JMI Chairman Md Abdur Razzak and took action against the health ministry and central medicine department for their alleged involvement. The government has taken action against Jubo Mahila League leader Papia for making illegal money through lobbying and other illegal activities.

Apart from these, the ACC will prosecute some lawmakers soon for their alleged involvement in accumulating illegal wealth and other irregularities, sources said.

At least eight AL lawmakers were facing the ACC inquiries while inquiries against five of them were initiated in October, 2019 following the move against those involved in casino businesses and other irregularities.

Besides this, Rajshahi-1 lawmaker Omar Faruk Chowdhury was also facing the ACC’s inquiry while Lakshimipur-2 independent lawmaker Shahid Islam and his wife Selina Islam, MP from women’s reserved seat, have already been prosecuted.

The ACC prosecuted Papul and his family members on the charge of laundering about Tk 148 crore following the arrest by the Kuwait government on June 6 on charges of human trafficking and bribing Kuwaiti officials.

Talking to the Daily Sun, former Vice-Chancellor of Dhaka University AAMS Arefin Siddique said the country has witnessed government’s efforts to curb corruption and drug abuse but it has apparently come to a halt due to the coronavirus pandemic.

“Abuse of drug has allegedly increased and drug kingpins have cashed in on the COVID-19 situation, but the government should handle the issue with iron fists,” he said.

“Healthcare sector has been seriously hampered due to corruption and irregularities, so the government should go tough on the drug kingpins and the corrupt to implement Prime Minister Sheikh Hasina’s policy of zero tolerance,” he added.

Besides this, after the AL assumed power in 20019, the government has taken a policy of zero tolerance against narcotics and their dealers.

As part of the move, the government conducted drives against drug kingpins in 2019 across the country. A total of 102 Yaba dealers and smugglers have surrendered to police with 350,000 Yaba tablets and 30 firearms.

Dozens of drug traders and peddlers were killed in “gunfights” with law enforcers.

Awami League Presidium Member Abdur Rahman told the Daily Sun that the government has taken a firm stance against corruption and other irregularities.

“Even, the AL will not allow any alleged drug abuser and corrupt person in the party. Stern action would be taken against them if anyone is found involved in crimes,” he said.