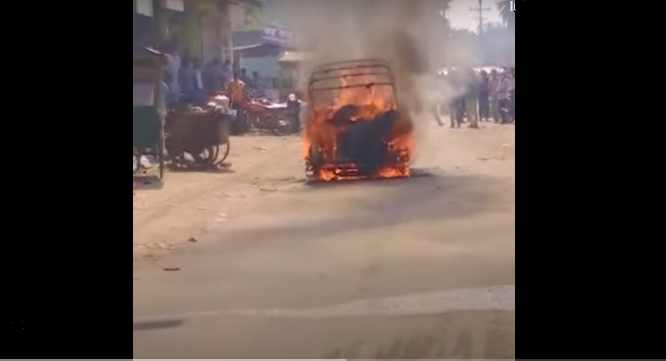 At least two persons of a family sustained burn injuries from fire caused by gas cylinder leakage of a CNG-run auto-rickshaw in Kishoreganj on Sunday.

The accident took place in front of Shahid Syed Nazrul Islam Medical College and Hospital at around 11:45am today.

The injured were identified as Latifa, 45, and her daughter Lima, 20. They are residents of Bus Stand area of Kotiyadi upazila.

Local witnesses informed that Latifa went to Shahid Syed Nazrul Islam Medical College and Hospital for treatment with her daughter Lima. On the way when they reached in front of the hospital the auto-rickshaw suddenly caught fire. The driver of the auto-rickshaw fled the scene at once.

Latifa and Lima’s legs were burnt in the fire and two other passengers got minor injuries.

Later, locals rescued them and took them to the hospital.