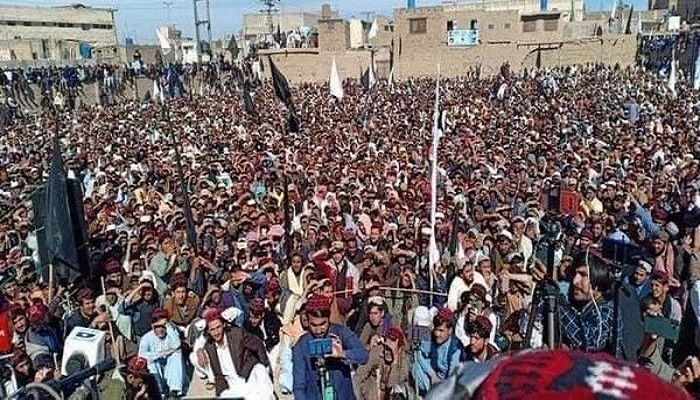 Thousands of people on Friday participated at the Pashtun Tahafuz Movement (PTM) rally in Chaman demanding an end to war in Afghanistan and also to "ensure an end to extrajudicial killings" in Pakistan.

"Thousands of people gathered in #PashtunLongMarch2Chaman. They demanded an end to the war in Afghanistan and sincere action against terror havens. @ManzoorPashteen said they want the state of Pakistan to ensure an end to extrajudicial killings. No word from Pakistani official as yet," said Malali Bashir, a journalist.

A Twitter user said, "PashtunLongMarch2Chaman is another successful gathering of PTM although it is a local rally, but is attended by thousands of disappointed and grieving Pashtuns demanding peace in their homeland in Pakistan and Afghanistan. Will apartheid Pakistan change its destructing policy?!!"

"Massive gathering at chaman PTM Rally. Thousands of people gathered in PashtunLongMarch2Chaman. Manzoor Pashteen said they want the state of Pakistan to ensure an end to extrajudicial killings," said another Twitterati.

Another Twitter user said, "A huge crowd in PashtunLongMarch2Chaman demand civilian supremacy in Pakistan and end to war in Afghanistan. @ManzoorPashteen demanded: - Give up "good & bad Taliban" policy - Bring missing people to courts - End target and extrajudicial killings - Stop the reemergence of Taliban."

Meanwhile, PTM leader Mohsin Dawar thanked the public for the success of the rally.

Taking to Twitter, Mohsin Dawar, PTM leader Mohsin Dawar said, "Congratulations and well done PTM Chaman for such a successful jalsa. PTM is a reality. It cannot be ignored."

On November 17, the PTM held a public gathering in Miran Shah, North Waziristan, calling for an end to the brutalities in the country in the form of enforced disappearances, killings and abuses of civilians, and asked the Pakistan military to abide by the Constitution.