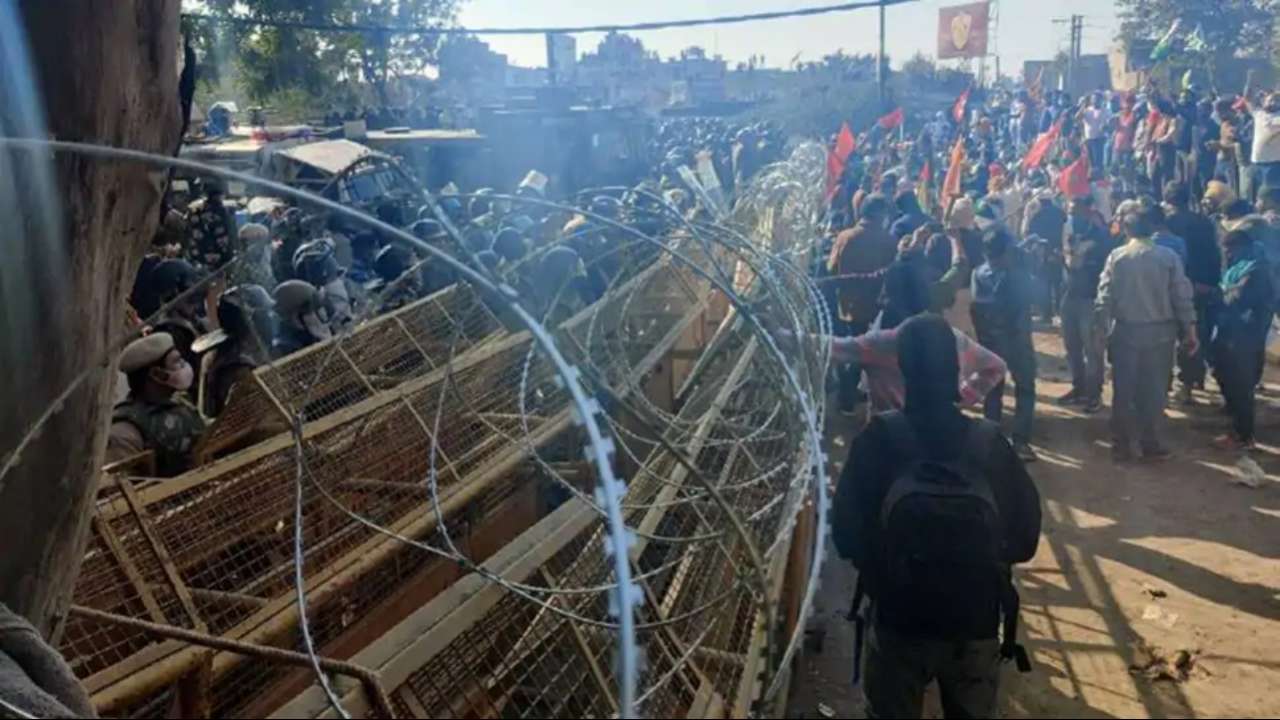 Delhi and it's adjoining areas on Friday, November 27, bore the brunt of farmers protest. The farmers who had come to the national capital with genuine demands now seem to be playing into the hands of politicians and the Khalistan group.

This can be understood by the fact that a protestor in Punjab was threatening Prime Minister Narendra Modi with consequences similar to that of Indira Gandhi (Assassination). During the protest, some people were also seen holding posters of Jarnail Singh Bhindranwale, a Khalistan terrorist.

About 10,000 farmers from Punjab tried to reach the capital of the country Delhi and stage a protest near the Parliament against the new agricultural laws. However, they were stopped at the Singhu border near Delhi by the police and what followed was complete mayhem. There were violence, stone-pelting incidents, some were even seen wielding swords and trying to beat the police with sticks.

Despite all the unruly incidents the farmers have been given permission by the Centre to enter the capital and protest at a place called Burari, which is only 20 km from the Parliament.

Several other farmer organisations from states like Haryana and Uttar Pradesh are participating in this agitation but the protest is largely being carried out by the farmers of Punjab.

The Centre had recently passed a new farm bill which came into effect from September 27, 2020. The first law is related to the Agriculture Produce Markets Committee (APMC). Under this law, farmers will be able to sell their crops to other buyers besides government mandis. It also gives the provision of selling their produce in other states. More interestingly it allows the farmers to sell their produce online. But the protesting farmers argue that the central government wants to end the current system of minimum support price.

There are two more bills but the farmers are mainly concerned about the Agriculture Produce Markets Committee (APMC). The farmers fear that this bill will end the Minimum Support Price (MSP) of their produce guaranteed by the government every year.

The aggressive nature of protest clearly indicates that it has been hijacked by political parties like the Congress, Akali Dal and Aam Admi Party (AAP) for their selfish interests. Taking out advertisements in newspapers, trending hashtags and aggressive protests certainly can not be done by farmers on their own. Surprisingly terror outfit like the Kalistan has also joined the agitation.

The protesters claim that they have prepared to carry out agitation against the government for the next 6 months.

Dairy farming and beekeeping are the best examples of adaptive farming which the farmers of Punjab and Haryana have failed to do.

At present, Freight Corridors are also limited in Punjab, so even if the farmers want to grow other crops, it is not easy for them to get necessary raw materials. There is a lack of storage facility and processing units as well in the state. Even though Punjab farmers look like the most prosperous in the country they are slowly losing the race.

For instance, polyhouse farming could have been a good transition for the farmers of Punjab but not many knew about it. On the other hand, the farmers in Pune are making good money adopting this farming method.

On the one hand, there is lack of awareness among the farmers of Punjab and on the other, the government does not look keen in helping the farmers of the state with new farming techniques, which is why such protests take place.

Our neighbour Pakistan is closely monitoring the agitation and wants to push Khalistan supporters into it so as to create unrest in the country. In fact, Khalistan supporters have already made an entry which was evident by slogans against Prime Minister Narendra Modi and the poster of Jarnail Singh Bhindranwale surfacing during the protest in near the Delhi border.

Foreign organisations that support the Khalistan movement are also supporting the farmers' agitation in different ways. It is therefore imperative for the centre to take everyone into confidence on this matter.